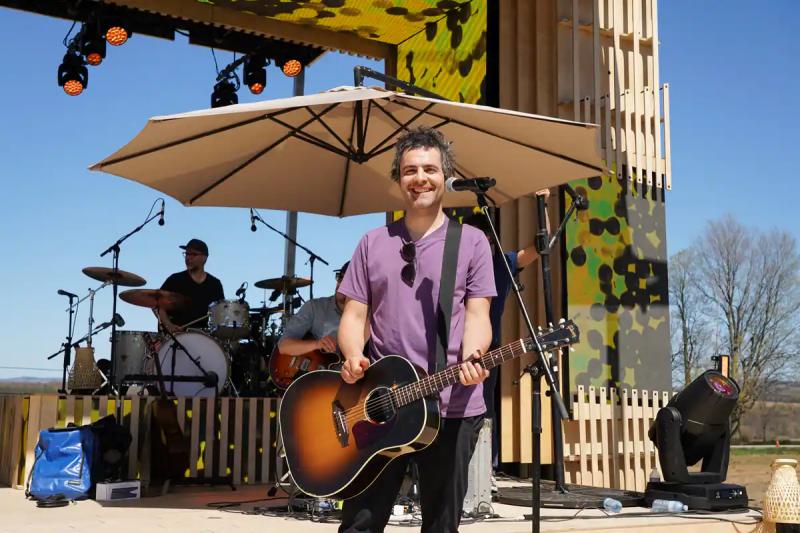 Like many singer-songwriters, Dumas is once again having a blast on stage, making festival-goers dance all summer long across Quebec.

Nearly a quarter of a century after his debut, the artist from Victoriaville is working on new material that he is eager to share with his admirers.

Steve Dumas, whose real name is , is from the episode of The Beautiful Tourdedicated to Centre-du-Québec, this Monday, at TVA. It was at the Fromagerie du Presbytère, in Sainte-Élizabeth-de-Warwick, that the team of host Guy Jodoin brought together Johanne Blouin, Dumas, Olivier Faubert and Daniel Grenier, from Chick’n Swell. Les Trois Accords lend themselves to the Postcard segment at the Drummondville Golf Club.

Dumas takes advantage of his time on set, with a field and the Appalachians in the background, to interpret his hits Happiness and Perfect Day, which, he says, sum up his time in Sainte-Élizabeth-de-Warwick well. He also realized a childhood dream by singing with Johanne Blouin on Dors Caroline, a clip he watched in the good old days on MusiquePlus.

Proud of his roots and tireless ambassador of Victo, a city that continues to nurture his creation, the 42-year-old singer tries to return there as often as possible to see his mother. He likes to introduce his 10-year-old son to the region where his dream of making music grew into a full and complete career, following his triumph at the Festival international de la chanson de Granby in 1999. Two years later later, he released the first of his 15 albums.

It was in his hometown that Dumas recorded his first demo, in cassette format, and Daniel Grenier, whom he did not know at the time, was one of the first to buy a copy from him. .

“My visits to Centre-du-Québec, and particularly to Victo, ground me. It seems like every time it reminds me of how far I've come, and I still have that same teenage spirit in my head when it comes to doing shows and music,” he told QMI Agency.

For the shows that are on his agenda this summer, especially for the National Day and several festivals, he expects to get people moving, because this has already been the case for a few weeks. He also presents his songs that move the most.

“We are living a magical moment, it's incredible to see people again, who are dancing, it's the spring! These are the real and great reunions this summer,” said Dumas, who is grateful to do the job he loves and, above all, to last.

“I'm lucky I started young. To still be here, I never would have thought that. What a privilege to still do “shows” and have people follow me. I really have a loyal following and I don't take anything for granted. Let's say I try to enjoy it as much as possible and put on some good shows.”

He plans to take advantage of the summer to see shows, jog and trade the ball with his son, who plays baseball.

He is also working on new songs and has just unveiled a new extract, The sun at its zenith. “I don't know what it's going to be like, I've accumulated stuff in recent years. I'm in the last stage, I'm cleaning up, I'm taking my time, because there's no rush”, he mentioned about his next opus.

L The episode of The beautiful tour celebrating Centre-du-Québec will be presented this Monday, at 8 p.m., on TVA.