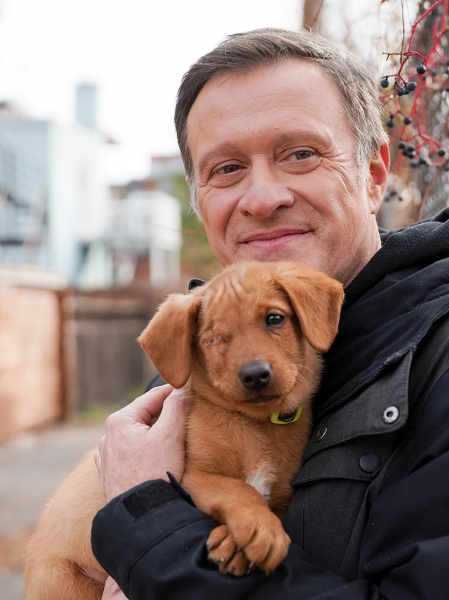 The “Refuge animal” series returns for a special season, its eighth, this time shining its spotlight on the organization Les Aristopattes.

Available now on the Vrai platform, the eight episodes of “Refuge animal – Mission: Aristopattes” piloted by Stéphane Fallu allow him to continue his volunteer work with animals. If in the seven previous seasons we saw the host and humorist working with different shelters, this time it is The Aristopattes that occupies him entirely.

The only non-profit organization in Quebec specializing in the care of abandoned animals that are sick or injured, Les Aristopattes does not even have a fixed address, all of its precious money going to the animals. The team takes care of specific cases that other organizations or shelters are unable to take care of, for lack of resources. The animals they care for thanks to donations from the public are placed with foster families, who also play a key role in restoring them to a quality life. Once the cats and dogs are back on their feet, an adoption process can begin.

Stéphane Fallu believes that the series produced by Trio Orange has been a success so far because it asks questions that ordinary mortals have in mind. In this season, we see him transporting animals, finding foster families, attending medical appointments and taking part in fundraising activities. He also organized a benefit show for the organization.

“I try to help as much as I can, to be a spokesperson for them, but I am not an expert, I don't even know if they would let me take care of rabbits,” he joked in an interview.

In the first episode viewed by the QMI Agency, the team notably helps Bleuet, a small Pomeranian who fractured his two front legs when he fell from a vehicle, as well as Lowney, a Husky whose two eyes because its previous owner did not have it treated in time.

The show is not scripted. Also, Stéphane Fallu experiences great emotions and sometimes he is less expressive, by his own admission. “Sometimes it can also happen that I have no emotion when others have it, there are animals that I love and others with whom it is more difficult, sometimes there are behaviors that are not good and I adapt. What's great is that I'm learning all the time doing this show and rubbing shoulders with these people,” he said, saying he loves working with director Francis Darche and the cameramen, who have a gentle approach with animals.

“We see the reality, how expensive it is. Money goes fast at the vet. We also meet a responsible breeder and we generally talk about the problems of the organisms”, indicated Stéphane Fallu, adding that “emotionally, the series will look for a lot of things in you” and sometimes it is more difficult because of the distress. people and animals.

Stéphane Fallu presents his show “Pus d'signal” on July 14 at the Club du Square Dix30, in Brossard, Montérégie. He will also be at the galas of ComédiHa! and Just for Laughs. “I have a lot of projects coming up that I can't talk about. You're going to see me the hoe in a lot of business.”