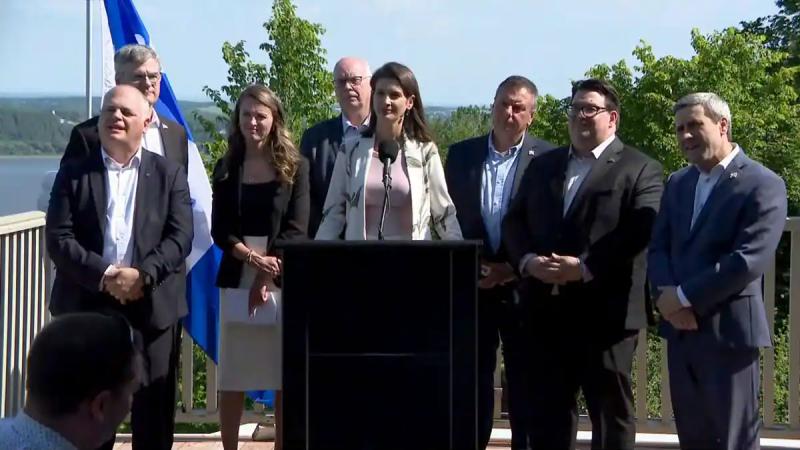 Despite the recent clashes between the government and the City of Quebec over the tramway and nickel, Geneviève Guilbault is convinced that Bruno Marchand supports the CAQ's “inclusive” approach to economic development for the greater Capitale-Nationale region.

This would even be the case for all elected officials and entrepreneurs in the greater Quebec City region, argued Ms. Guilbault, praising the merits of “inclusive economic development” during the assessment of elected CAQ members of the Capitale-Nationale.

According to the Minister responsible for the Capitale-Nationale region, the government bet that this approach was the “best decision for everyone”, while agreeing however that it could “please or displease”.

“When we talk to entrepreneurs, everyone agrees that we have everything to gain from being more visionary and more inclusive,” she said. ‘‘Think big’’, as a well-known character said in a well-known movie in Quebec. So we are ''think big'' for our Capitale-Nationale.”

Asked more specifically about her relationship with the mayor of Quebec, Bruno Marchand, the Minister expressed that the government is “working with the City of Quebec as [he] has always done” and that she was convinced that Mr. Marchand adhered to the “regional approach” of the CAQ.

“I do think that Mr. Marchand agrees on the fact that if we want to win as a major region of the Capitale-Nationale, if we want to win in terms of attractiveness for private investment, for paying jobs, for immigration, for major events, etc., well, we had better gain in stature rather than lose it,” said Ms. Guilbault.

Remember that the mayor of Quebec had, in the spring, expressed certain reservations about the third link project, which, according to him, would risk encouraging urban sprawl. Mr. Marchand had also drawn criticism from certain elected CAQ members about the concept of a shared street for the tramway. Minister Cairo had notably accused him of waging a war on the car.

The “inclusive” approach which would have been that of the government in recent years is not only a matter of economic development, it would also extend to mobility management, added Geneviève Guilbault.

The Minister recalled the “$10 billion invested in sustainable mobility” in projects such as the Quebec-Lévis tunnel, the tramway and even the widening of highways aimed at better serving the suburbs, as well as the importance of these projects for the quality of life and the development of the region.

“Because you can have the biggest dreams for your region, for your two regions, because I include Chaudière-Appalaches in that, but it takes a web of sustainable mobility, it takes a way to get around [. ..], said Ms. Guilbault. You have to be attractive, you have to have quality of life, you have to be able to move around in a second metropolis that may be called upon to continue to develop.”

The results of the elected officials of the CAQ of the Capitale-Nationale also had an electoral flavor. While praising the achievements of her government, which would have delivered more than it had promised for the region, Ms. Guilbault insisted on underlining the difference in philosophy that opposes her political party to Québec solidaire.

These remarks were not to the liking of the candidate for Québec solidaire in the riding of Taschereau, Étienne Grandmont, who reacted by criticizing the CAQ's “lack of vision” for the Capitale-Nationale.

“The CAQ has nothing to brag about with its poor record for Quebec. For four years, this government has offered nothing to the people of Quebec except for a six-lane highway under our river and more nickel in the air we breathe,” said Étienne Grandmont in a press release. /p>

Questioned about the relative silence of the CAQ caucus in the Capitale-Nationale regarding the revision of the nickel standard, Geneviève Guilbault argued the importance of “keeping a cool head” about such sensitive issues as air quality.

“The issue of air quality in Limoilou, it has been around for a long time […]. It existed before nickel, it will exist after nickel, if we do not put in place lasting and global solutions, ”said the minister, before recalling the actions taken by the government of which she is a part.