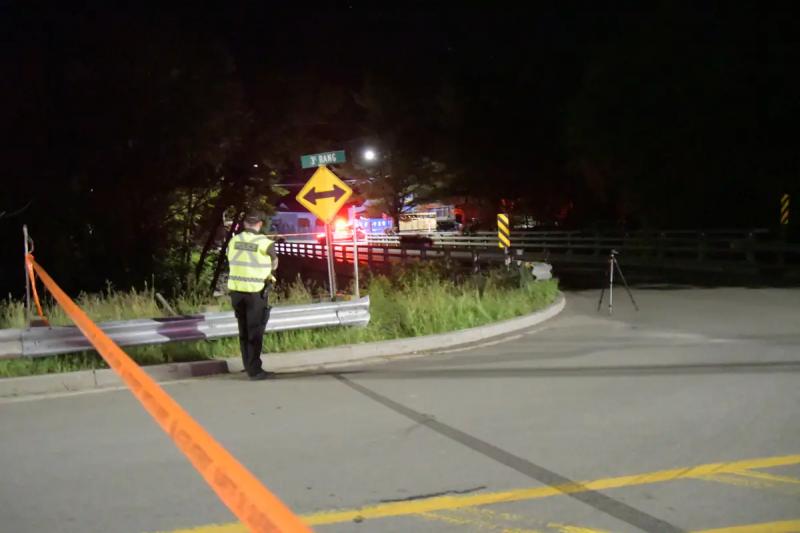 The Sûreté du Québec confirmed the death of the two occupants in the car accident that occurred in Val-Alain on Monday evening. He is an elderly man in his thirties, from Val-Alain. As for the person who accompanied him, a woman, according to our information, an autopsy will be performed and identification measures will be necessary in order to confirm the identity. Speeding may have been the cause of the single-vehicle accident.

The accident occurred near the intersection of rue Principale and 3e rang, after leaving the road, just before the Du Chêne River bridge. There is no sign of braking on the roadway.

“According to the first information gathered, the vehicle was traveling in a southerly direction and it would have passed over the river before hitting the rock face which is located on the other side,” said Hélène St-Pierre, spokesperson for the Sûreté du Québec.

“The vehicle caught fire on impact,” she added.

The two occupants were seriously injured and there are fears for their lives. The Sûreté du Québec has opened an investigation to establish the causes and circumstances of the accident.

“Speed ​​may have played a role in this collision,” said the spokesperson.&nbsp ;

A witness, Nicolas Brodeur, was doing some mechanics in his garage when he heard a noise.

“It feels like a big gust of wind and then I heard a boom. I ran out and saw nothing. It was still dark. I saw the guardrail all torn off and that's when I saw the vehicle on the other side of the river. I rushed to get there, but the fire had already started. It got worse over time,” said Mr. Brodeur, who was still in shock the day after the accident.

The vehicle broke the guardrail and flew over the river before crashing into trees on the other side of the bank.

“He crossed the river without touching the water.”

According to Val-Alain residents, the place is not known to be accentogenic.

< p>“He flew. I've been here for 25 years, I've never seen this. It rolls, but it rolls everywhere. He dropped it,” added Sylvie Drolet, who lives near the scene of the accident.