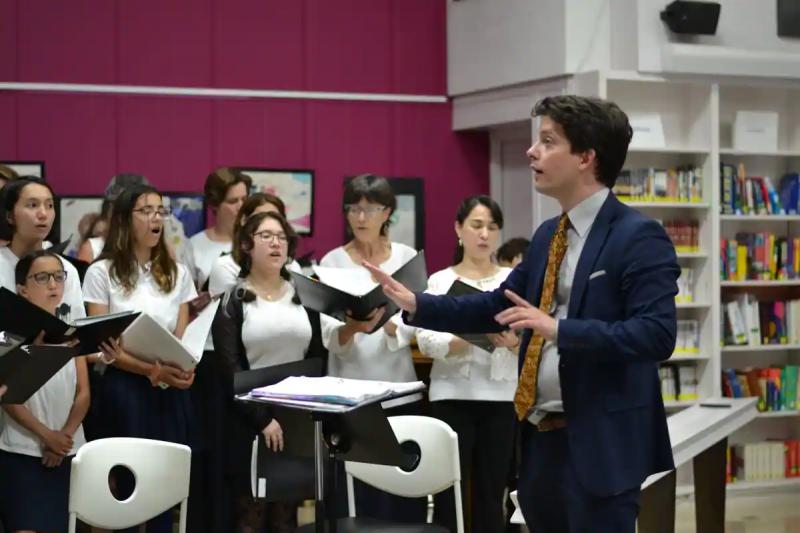 A native of Sainte-Ursule, Mauricie, Simon Charette has come a long way since he first touched a piano at the age of eight in the family home. He is now settled in the suburbs of Washington and makes a living from his art.

It all started when his mother wanted to sell the house piano: the child he was s is immediately opposed to it.

“I was insulted that my mother wanted to part with this instrument. I was finally able to keep it on condition that I take lessons,” he recalled in an interview.

Then, the more time progressed, the more Simon and the music were in unison. Among other things, he joined choirs, including the Amadeus Vocal Ensemble, in Louiseville, a neighboring town of Sainte-Ursule, for nearly four years before joining the Chœur polyphonique de Montréal during his studies at Cégep de Saint-Laurent. in classical piano. Returning to the University of Montreal, he decided to trade the piano for singing, finishing his university studies with a master's degree in classical singing.

On Montreal soil, he met an American. The lovebirds lived there until his wife received a call to teach at a university in Washington.

“I decided to follow her and got a job as a teacher in a French school in the capital of the United States while taking singing lessons in New York. At the same time, I started to direct choirs”, told us the one who currently directs the Choir of the Embassy of France, in Washington, as well as other formations like the Choeur Rochambeau of the French international school of same name in the U.S. Capital Region.

“Fifty percent of my professional life is in French in Washington,” said the now 37-year-old man, who had the opportunity to lead singers during French President Emmanuel Macron's visit to Washington in 2018.

Simon Charette, who is also assistant artistic director at the Washington Opera Society, lives from music. But, he notes that the reality of a musician is very different in the United States compared to Canada.

“Here, you cannot be poor. In Montreal, a musician earning $20,000 a year can get by, here it's impossible,” he believes.

He admits, however, that even in the United States, it is extremely difficult to break into the music business. According to him, the entourage of a musician can have a major impact on his career.

“They are the ones who go encourage you in difficult times. Yes, you have to be talented and practice a lot, but loved ones are not to be neglected. Every time I was discouraged, there was someone who gave me a helping hand.”

Mr. Charette is currently doing an orchestral conducting internship, who aspires to obtain this title at the opera one day.

“This job requires a lot of confidence. From the first minutes the musicians can see whether or not you are competent or not”, mentioned Mr. Charette during our interview.

And , he told us that he would also like to perform again in Canada from time to time.

“I miss the slower pace of life in Quebec as well as the connection with nature in the Belle Province” , he mentioned, he who also holds American citizenship.