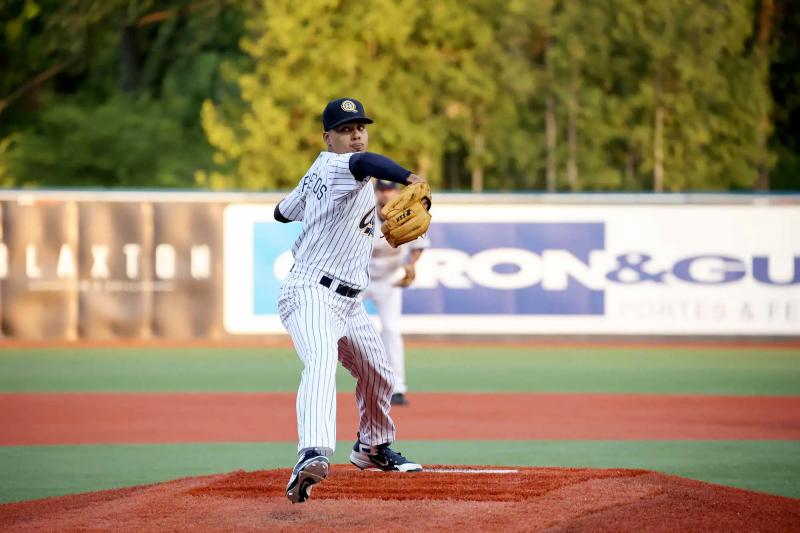 A 2.57 ERA, 40 strikeouts in eight starts and a 3-1 record. Capitals pitcher Miguel Cienfuegos has been on fire — or even “fuego,” as his nickname goes — since the start of the season, but the Quebecer claims he doesn't know it.

” I am aware that things are going well, but I have made it my goal not to look at the statistics until halfway through the season, says the friendly gunner.

“I just see them once in a while, on the scoreboard, when I'm warming up,” he continues. Or when my parents send them to family newsgroups.”

If we listen to him, the 25-year-old left-hander must therefore not be aware that after a little over 30 games played in the Frontier League, he is third in the circuit for the average points allowed ( before Tuesday's games).

“I've been doing the job from the start, he says. Just don't let go. And it brings a lot more opportunities than we think. ”

Because yes, “opportunities”, Cienfuegos has some that have been offered to him recently, even though he is only in his second season in the Frontier League. The Mexican league has been particularly interested in his services.

When such opportunities arise, he listens to his coaches, asks for advice, because he is aiming for “the next step”.

And this, even if the Capitals still represent a dream for the artilleryman from Laval, who wanted at all costs to play for Quebec this year.

He also says that he felt something unique when he first donned the white and blue uniform for the home opener on May 24. A meeting for which he was the starting pitcher.

“It was really special! he admits. To be here, with the “fuego day” [the expression used when Cienfuegos is the starter], a concept that we started last year and which is getting tough now, with the supporters who are starting to know me, I have so much fun!

“I feel in the right place, I have so much fun here,” he adds. And as long as it stays like that, I tell myself that the opportunities elsewhere, they will come when they come. »

But also in Panama

Mexico can therefore wait, he said. Especially since this offer did not suit him perfectly.

“It was not the right decision to make,” explained Cienfuegos. Here I'm a go-getter, it's all good, my name is starting to get around a bit more, so I'd rather keep it going. he played during the winter – which is eyeing him in anticipation of the next World Baseball Classic, in 2023.

To say that not so long ago, the Quebecer thought that he might be done with baseball.

Not even two years later, he has reached the point of trying to save his arm so as not to spoil the offers he could receive, with the support of the coaching staff of the Capitals.

For example , Cienfuegos was supposed to get Friday's start against the New Jersey Jackals, but he will face them on Saturday instead, in order to rest more.

Michael Austin was brilliant on the mound against the New York Boulders on Tuesday, helping the Capitals go undefeated in 13 games at Stade Canac this season and get back on track after a long and hazardous journey.

Supported on offense by David Glaude, who hit twice from the safe spot, and T.J. White, who hit his ninth long ball of the season, Patrick Scalabrini's side won 5-1.

Austin (4-1) stayed in office for more than six innings, giving up just four hits. The right-hander was taken out of the game when he allowed his first point, on his 92nd shot.

The American left the hill under the applause of some 2,500 spectators who came to watch the match.

< p>The biggest scare he caused in the game was when he was seen chasing the pain after being shot in the ankle in the fifth inning. But much to his trainer's relief, Austin was more frightened than hurt.

“Yeah, I was nervous when I saw that! conceded Scalabrini. It was going so well for him, I was hoping he could give us a sixth inning.”

The manager was particularly happy with his gunner's performance. Especially since he was on the mound when the Capitals lost 17-6 to those same Boulders last week.

“It was doubly important [given this last result], noted the coach. He had to be able to come back strong, something he did. We made some big adjustments before facing them [Tuesday]. ”

They resound and break

It was Pedro Gonzalez who woke up Quebec's offense in the second inning. The outfielder's double pushed Reece Yeargain home plate. Then, David Glaude also struck from a safe place, allowing Gonzalez to score in turn.

The Capitals sticks sounded again three innings later. And even broken: Kyle Crowl smashed his own on a shot by Josh Loeschorn (0-1), but his single turned into a double when the ball bounced over Francisco Del Valle in right field. < /p>

White then crossed home plate. He would do it again in the seventh, when his home run to center field allowed the Capitals to score two runs.

“The home run broke their backs,” Scalabrini admitted. We had a few tough series, but [tuesday] it was a clean game.