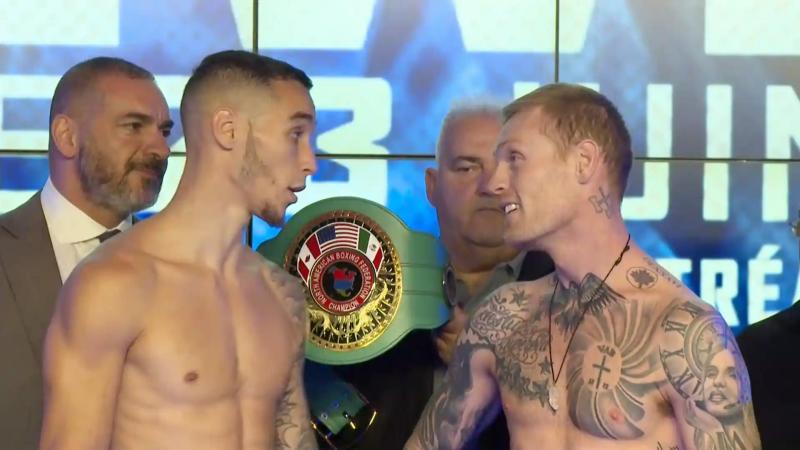 With 600 tickets sold at the casino and the TV revenue from Punching Grace and TVA Sports?

It should be an investment and not an expense. You have to, otherwise you have to replace Justin Trudeau and François Legault immediately with Camille Estephan and Éric Duhaime.

As a bonus, you could have a passport.

Estephan easily answers questions about this gala like no other.

“There will be a deficit, but it will not be huge. And basically, it's an investment we make by giving such quality to our Punching Grace subscribers. The recurring customer, the one who comes back, is the most profitable customer, ”says the promoter.

“In addition to TVA Sports and Punching Grace, we have sold a lot of international TV. These are not always astronomical sums, but the accumulation of sales to distribution companies ends up giving a very interesting amount. Argentina, many Latin American countries and companies from around the world bought the gala. The quality of the boxers and the number of fights make it possible to sell for more”, says Estephan.

In any case, the financial machine behind EOTTM makes it possible to amortize the investments… for several years.

Louis-Philippe Neveu, general manager of TVA Sports, was at the Tampa airport when I contacted him late yesterday afternoon. He was returning to Montreal and will be at the casino.

“When Camille Estephan told us about her plans for the gala, we had the same reaction as you. It is a boxing gala with exceptional depth. There are big fights from the first two with Leïla Beaudoin. So much so that we will broadcast all the fights from 6 a.m. In addition, everything is falling into place in the right way since there is no hockey on Thursday [today],” said Big Boss Neveu.

Neveu is particularly happy to be the broadcaster with Punching Grace of Steven Butler's NABF title fight.

“Steven Butler is an endearing young man. We forget how young he is still. TVA Sports had broadcast live from Japan his fight for the world title against Ryota Murata. And we don't want to miss out on Mary Spencer. It's the sporting event of the week in Quebec, that's for sure,” added Big Boss.

And now the card itself. I asked Laurent Poulin, from Boxingtown and the greatest boxing connoisseur in the West (after Marc Ramsay) to pass me off as brilliant.

– So the fans are going to be relieved to see Erik Bazinyan win by decision against Marcelo Coceres. He's going to get shuffled around like a pair of pants in a Maytag.

– Mary Spencer, TKO in the third. The message will be launched to the other boxers. (I would say sixth)

And Laurent adds that everyone on the map is going to have to work hard. The matchmaker did a great job.

Le Journal de Montréal and Lady Ju will be there early.

Friday, Martine Vallières-Bisson will fight against Laura Grzyb. In Poland, he is expected as a beautiful victim to offer to the young rising star that is Laura Grzyb. It's not that obvious. His trip lasted 42 hours and the brothel in Dorval almost jeopardized his departure. Fortunately, she already had her passport.

Everyone in boxing was happy to see his big face. Even yesterday, for the first time, Michel Hamelin allowed himself to smile in public.

He was not wearing his favorite t-shirt, that of the Face de beu, his steak house in Thedford.

Michel Hamelin, former boss of combat sports at the Régie des alcools, des courses et des jeux, found himself with his nose glued to the scale yesterday at the casino.

Duane Ford, the president of the NABF, asked him to be the supervisor of the federation for the three titles disputed this evening in Montreal.

“I accepted with pleasure to help him out. He asked me if I would agree to be a supervisor on other occasions in Montreal or elsewhere, I said yes. But I don't want to commit to all my weekends,” explained the new supervisor.

GETTING TO KNOW FRIENDS

Hamelin was visibly happy to see his friends from the Régie again.

“I had not seen Jean Douville in person since the 11 March 2020. It takes me out of the house and I find a world that I love,” he said.

Hamelin had been invited to go to Romania to lend a hand and advising the organizers when Lucian Bute had fought there. And let's be honest, in New York, Las Vegas or London, his reputation went beyond borders.

It's Denis Dolbec, the president of the RACJ, who must be proud to see the competence of his personal, past and perhaps future, to be recognized in this way.

It makes him and his organization grow.

These politicians are so sensitive to these marks of recognition from abroad.