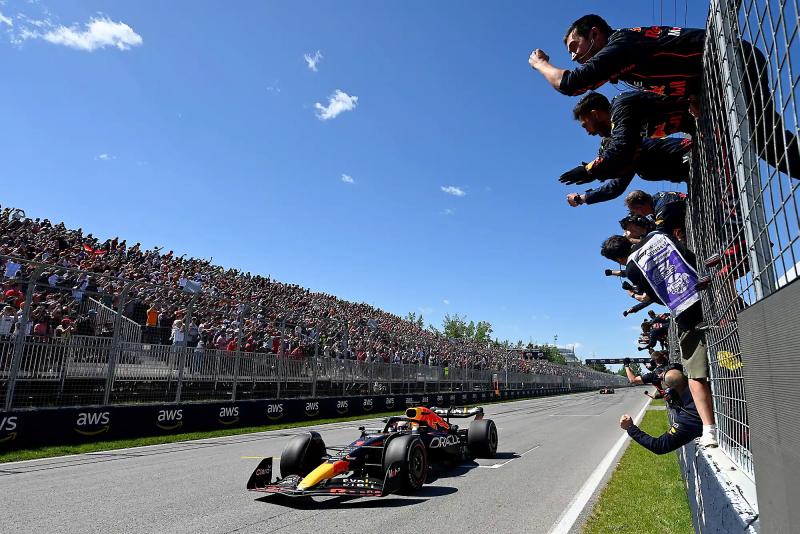 When the mechanics of his Red Bull hold up, Max Verstappen is unbeatable, as he demonstrated on Sunday at the Canadian Grand Prix.

The driver Dutchman, who had another perfect run on a track where he had never managed to win, is currently making rain and shine in Formula 1.

With his fifth victory in six races, he took the lead in the championship with a lead of 46 points ahead of his team-mate, Sergio Pérez.

And the gap would be even greater if he hadn't been forced to retire twice earlier this season.

What we remember from his performance at the Gilles-Villeneuve circuit is that he never wavered under the pressure of Carlos Sainz.

The Spaniard may have tried everything, in with slightly cooler tires and three DRS zones (removable spoiler) to facilitate overtaking, he never managed to destabilize his rival.

This mistake he wanted from the leader of the the race never came. Verstappen has once again honored his title of world champion.

Ahead of Clark and Lauda

At only 24 years old, -Verstappen now sits ninth in the ranking of the most successful drivers in 1. His 26th appearance on the top step of the podium now allows him to beat two legends of the specialty in Jim Clark and Niki Lauda. His next victory will ensure that he equals another exceptional pilot, the Scotsman and three-time world champion Jackie Stewart.

Some will say that at the time, the calendars included fewer events during a season, but regardless, the statistics prove beyond any doubt that it already deserves its place in the big leagues.

For comparison, -Verstappen made his 26th win on his 150th start in F1. Some, and not the least, have done it anyway before him.

Lewis Hamilton reached the mark on his 134th appearance. Even better, the Germans Michael Schumacher and Sebastian Vettel obtained their 26th victory at their 96th and 98th Grands Prix respectively.

In return, others have almost the same number of appearances as Verstappen and are still waiting to lift the winner's trophy.

And the first name that comes to mind is c is that of Sainz, who, despite good efforts in Montreal, never managed to get ahead of the Dutchman.

After 149 starts and 11 podiums in F1, this first victory is still long overdue. It's starting to do a lot and especially to play in the head.

The Briton did not sign an eighth triumph in Montreal, but his presence on the third step of the podium is perhaps a harbinger of better days. His back did not hurt him and his Mercedes is improving. Like what he will have to watch for next week in front of his home crowd at Silverstone, a circuit that has been a real playground for him in the past.

Even if he was still eliminated in the first round (Q1) of qualifying, the Quebecer came to extract a point at home by joining the finish in 10th place. He was able to take advantage of the last neutralization to redeem a complicated weekend for Aston Martin and especially for his teammate Vettel.

To Like Mick Schumacher, Zhou Guanyu was new to the Gilles-Villeneuve circuit, but he certainly did much better with a well-deserved eighth place. The Chinese rookie makes his place in F1 and notably managed to beat his experienced teammate, Valtteri Bottas, for the second time in a row in qualifying.

Too bad for Schumacher< /p>

Qualified sixth the day before, the young German driver suffered a technical failure in his Haas which forced him to retire on lap 20 and dashed his hopes of scoring his first points in F1.

The most successful drivers in F1 history