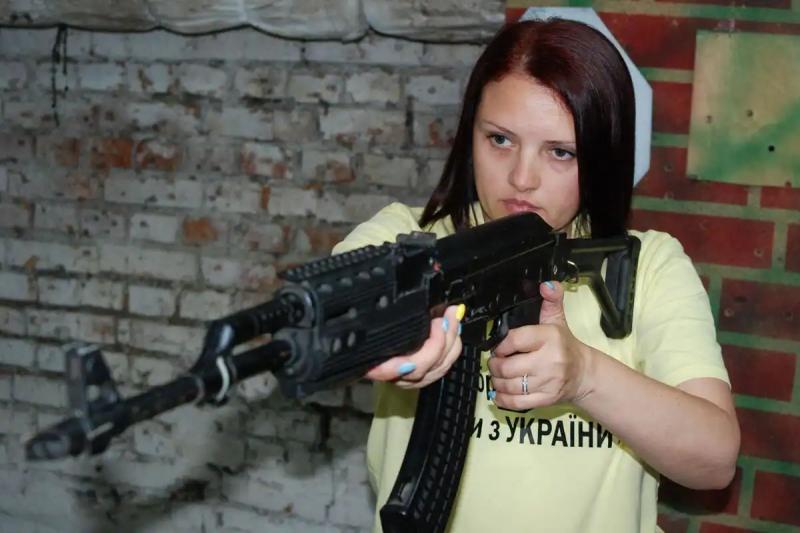 Crouched behind a partition, a woman takes aim at a target from a distance then scurries off to another position: in this shooting range in Zaporizhia, in the south-east of Ukraine, there are six of them, dressed in olive green, learn how to use a Kalashnikov assault rifle and train for urban combat.

This is their third session at the “The Sixth Sense” center where a team of specialists has just set up a program specifically for women, to introduce them to the weapons and tactics of urban combat.

=The fights are getting closer every day in the city and Natalia Basova, 47, did not hesitate long to register with her 29-year-old daughter, Uliana Kiachko. For her, the forehead is too close.

“I knew how to use weapons before the war. I used to go to shooting ranges, I was very interested,” she told AFP.

“But from now on, everyone must know if take it,” she adds, grimacing at the deafening sound of a shot just behind her.

Her husband and son, as well as her son-in-law, are on the front line. While their men are fighting, she and her daughter have decided to learn as much as they can about urban combat.

“Our instructor teaches us how to aim and how to use a weapon correctly,” she explains. “We already knew how to shoot, but we didn't know how to do it well, without risking injury to someone nearby”.

The training center until then only accommodated military personnel or fighters territorial defence.

But more and more women are showing up in Zaporizhia to prepare for the possibility of Russian forces entering the city. Under martial law, training is free for all townspeople.

The center's creator Sergeï Yeline, 47, explains that during basic training, students learn how to stand, how to aim, techniques for controlling the trigger, breathing and different ways of shooting.

For women, the program lasts 15 hours, but, he says, the basics can be learned in five or six hours.

“We have put together some tactical exercises for civilians because we all know that if the enemy enters the city, there will be street fighting,” he continues.

“And usually it happens in difficult places like ruined houses, basements or inside stores”.

“On the front line”

Instructors work with both military and civilians for training in three areas: basic weapons handling, a specialized course and tactical instruction for Kalashnikov assault rifles reserved in principle for forces special events.

Since the beginning of the Russian invasion of Ukraine on February 24, about 4,000 people have undergone training at the center.

“We have to know how to do it, to ourselves and for our families because we are right on the front line,” thinks another student, 33-year-old Iana Piltek.

She says she is not afraid to fight and swears that she will not hesitate to go out to defend her hometown. “We are training to win in a fight inside the city. If that happens, we won't let the city down.”