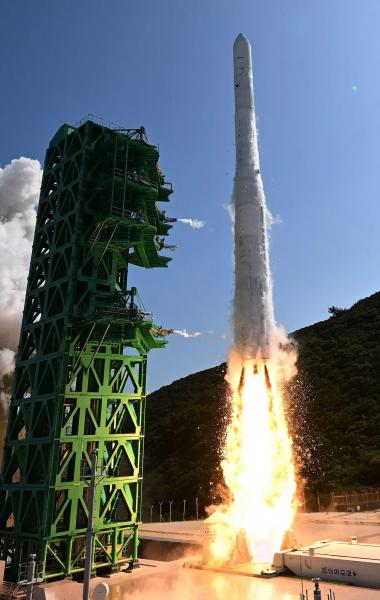 South Korea announced on Tuesday that it had successfully launched its first domestically-designed space rocket and put satellites into orbit in what authorities say is a “giant leap” in space.< /strong>

The Korea Satellite Launch Vehicle II, a 200-ton liquid-fueled rocket called Nuri, lifted off from the Goheung launch site at 4:00 p.m. local time (0700 GMT), with one commentator saying, “it looks like everything is going according to plan.” /p>

This second test comes eight months after the failure of the first launch during which the rocket failed to send its dummy payload into orbit, which was a setback for Seoul.

All three stages of the rocket operated, taking it to an altitude of 700 kilometers, and it successfully separated from a performance verification satellite and placed it into orbit, Seoul said.

The South Korean space program “has taken a leap forward,” said Lee Jong-ho, Minister of Science and Technology, calling the mission a success.

“South Korea has become the seventh nation in the world to launch a spacecraft with local technology,” he said. South Korea will launch a lunar orbiter in August, he added, saying the government would continue its quest to become “an advanced space nation”.

This test comes eight months after the launch of a first rocket that failed to send its dummy payload into orbit, the engine of the third stage having stopped working earlier than expected.

During the Tuesday's test, in addition to a dummy satellite, Nuri carried a rocket performance verification satellite and four satellites developed by four local universities for research purposes.

South Korea is the 12th largest economy in the world and one of the most technologically advanced countries with its flagship, the Samsung Electronics group, the largest manufacturer of smart phones and chips in the world.

But it has always lagged behind in the conquest of space where the Soviet Union had led the way with the launch of the first satellite in 1957, followed closely by the United States.

In Asia, the China, Japan and India have developed advanced space programs.

North Korea, a neighbor to the South and endowed with nuclear weapons, claims its place in the club of countries with their own satellite launch capability.

Ballistic missiles and space rockets use similar technology, and Pyongyang launched a 300-kilogram satellite into orbit in 2012. Washington condemned the launch, calling it a disguised missile test.

South Korea becomes the seventh nation – not including North Korea – to successfully launch a one-ton payload on its own rockets.

South Korea's space program has a mixed record: its first two launches in 2009 and 2010, which partly used Russian technology, ended in failure.

In January 2013, its first rocket, built with Russian scientists, was finally launched successfully.

“The fact that we now have our own space rocket means that we will be able to test and verify the technologies needed for space exploration projects at future,” Bang Hyo-choong, a professor of aerospace engineering at the Korea Advanced Institute of Science and Technology (KAIST), told South Korea's Yonhap news agency.

The industry Launching satellites is increasingly the preserve of private companies, notably Elon Musk's SpaceX, which counts the US space agency NASA and the South Korean military among its clients.

The test Tuesday seems to bring South Korea closer to realizing its space ambitions, including plans to land a probe on the Moon by 2030.