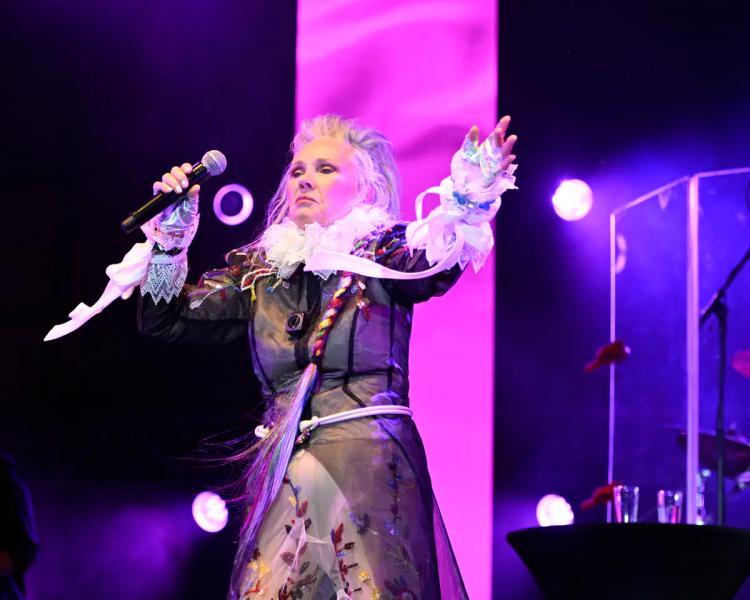 The great lady of Quebec song, Diane Dufresne, Pierre Kwenders and several other artists gave a spectacular kick-off to the festivities of the 15thth< strong> edition of Montreal Pride on Wednesday. A colorful performance to celebrate diversity!

A few thousand people had gathered on the Esplanade of the Olympic Park to attend the grand opening show of Pride Montreal with Diane Dufresne as headliner. At the foot of the “Big O”, where the singer gave the mythical Magie Rose concert almost 40 years ago, the show was a wink. The singer then filled the stadium in 1984 with no less than 55,000 spectators dressed in pink.

Thus, some festival-goers did not hesitate to display fuchsia, pale pink and candy pink on a radiant summer evening. The colorful crowd of all ages was most enthusiastic and we would have felt a thousand miles from a seventh wave of COVID-19.

Dressed in a light black tile frock coat and sporting a long rainbow-colored lock in her hair, the legendary singer came to offer four songs to a feverish audience.

She started her show with the very destined La vie en rose in disco sauce, punctuated by breathtaking vocals. Chills guaranteed, it was stunning!

“Pride is having panache”, she addressed a conquered crowd.

She then offered the song Comme un damné, taken from his latest album Meilleur après, moving on stage to compliment each of his musicians.

From the height of her 77 years, the eternal muse of Luc Plamondon offered a version of Oxygène adapted by the arrangements of Scott Price. The lyrics have also been adapted to reflect our times. Thus, rather than “I turn on the air conditioner”, it is rather “I turn on my computer or my cell phone” that the spectators could hear, the singer revealing this great need for oxygen in this world where technologies dominate.

Diane Dufresne then invited the audience to sing The Hymn to the Beauty of the World with her. She concluded the closing words of the sublime anthem, “Let's not kill the beauty of the world”, by addressing the crowd and reminding them that “the world is you…”

Earlier in the evening, Pierre Kwenders raised the thermometer of this already very hot evening. Dressed in a sheer tight dress, lined with a print featuring abdominal prominences and revealing a becoming black brief, and wearing neon green boots, the exuberant and sensual singer-songwriter and DJ of Congolese origin quickly reveals his equally eclectic universe where Congolese rumba, pop and R&B intertwine.

“Tonight, love is free” he launched before swaying lascivious hips and enthusiastic interactions that quickly won over the audience.

Kwenders delivered many of his titles with gusto, including Papa Wamba , as well as Imparfait, Kilmanjaro and No no no, from his album launched last spring, José Louis and the Paradox of Love.

He continued to speak deftly of love with the “Come over there, touch me there”, of the tender and voluptuous Amours d'été, and Heartbe's “Softly, calmly, tenderly” at before making the crowd dance even more ferociously with Malembe and Ego.