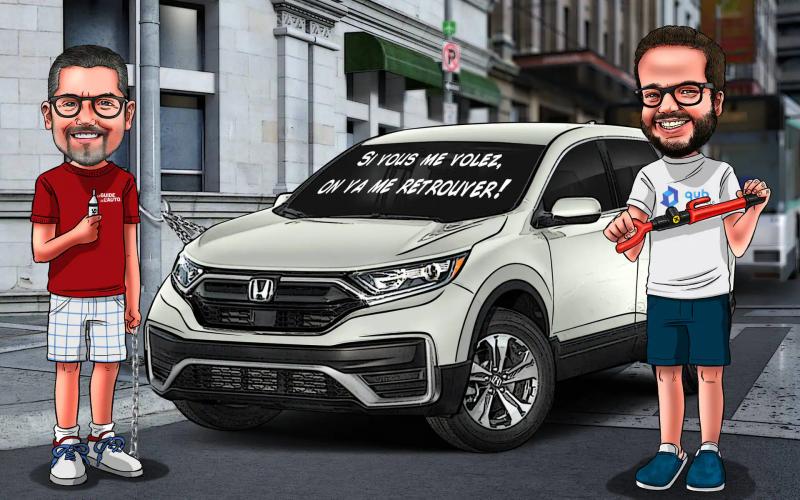 In Quebec, and particularly in Montreal, vehicle theft is a real scourge. In recent weeks, no less than three automotive journalists have had the vehicle they were testing stolen!

In order to illustrate the scope and seriousness of the situation, Mr. Lévesque immediately presented some absolutely alarming statistics related to vehicle theft.

“40% of stolen vehicles that end up at the Port of Montreal come from Montreal. 30% come from the rest of Quebec and the last 30% comes from Ontario. Often the vehicles are sent to Africa or the Middle East. In 2021, 5200 SUVs were stolen. Of the lot, 40% were Honda CR-Vs,” says Mr. Lévesque.

Among the other vehicles most prized by thieves, he cites the Ford F-150, Lexus SUV, Honda Civic , Toyota Highlander and Toyota Tacoma.

In Quebec, a vehicle is stolen every 15 minutes. Mr. Lévesque specifies that with a key signal amplifier, it only takes 18 seconds to steal a vehicle.

How does it work?

Well known, the TAG company uses RFID technology and triangulation in its tracking system. For its part, Domino uses GPS technology. “Our big advantage with Domino is that positioning is activated without the need for a squad member to jump into their vehicle and search for the stolen vehicle,” explains Mr. Lévesque. He adds that the system perceives the vehicle if it is moving and that the technology allows a tolerance of five meters.

Mr. Lévesque also mentions that statistics show that a tracking system reduces the risk of having your vehicle stolen by 90%.

How much does it cost?

The Domino system costs $349. It will save a hundred dollars a year in insurance costs. “Our facilities are always confidential. No one attends our facilities,” says Mr. Lévesque in order to protect the efficiency of the system.

During this show, there was also talk about the unveiling of the 2024 Chevrolet Blazer EV and the 2023 Ford F-150 Raptor R.

The two animators share their impressions of the recently tested 2022 Volvo XC40/C40 Recharge and Mercedes-AMG GT53 2022.

Answers to questions from the public

Antoine Joubert and Germain Goyer answer questions from the public regarding the purchase of a 2015 Chevrolet Equinox as well as the best choice between a Mitsubishi Lancer Evo, a Subaru WRX STI and a Ford Focus RS.