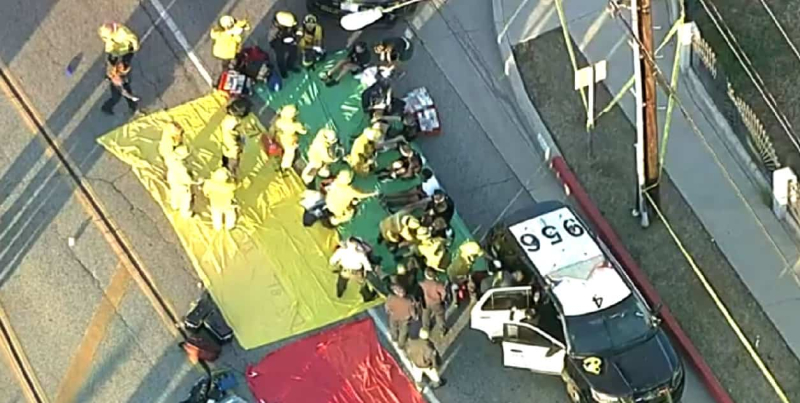 A car rammed into a group of police officers in training jogging in Los Angeles on Wednesday, injuring 25, including five seriously, according to authorities.

This group of recruits was doing its morning jog when a vehicle, heading in the wrong direction, slammed into them, apparently not slowing down.

“It looked like a plane crash,” commented the Los Angeles County Sheriff , Alex Villanueva, during a press conference. “There were so many bodies strewn all over the place with different injuries that it was quite traumatic for everyone involved,” he added.

The sheriff clarified that “limbs had been severed” among the 25 injured and that one of the patients was on life support.

Video taken at the scene shows a black SUV-type vehicle on the sidewalk, its front end damaged . He was driving in the wrong direction at the time of the incident, according to firefighters quoted by the Los Angeles Times.

Some of these police officers in training heard the car speeding up, said the Sheriff.

The driver, arrested at the scene, was not intoxicated, Alex Villanueva added, but according to law enforcement sources obtained by the LA Times, the driver allegedly told officers “he fell asleep” .

Tests were underway to determine if the 22-year-old was under the influence of any drugs.

The group of joggers consisted mainly of police officers in training for the Los Angeles Sheriff, but also included trainees from other nearby police forces.