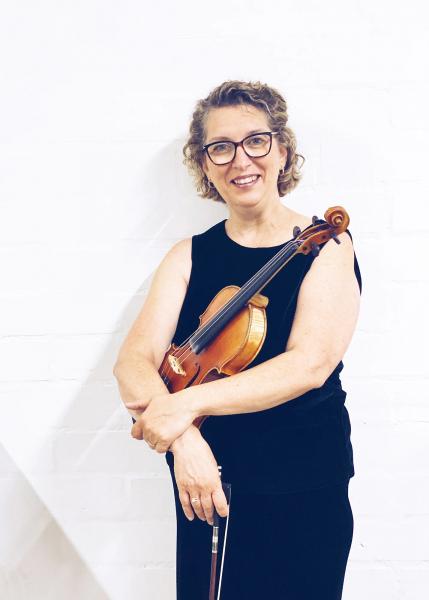 MEDELLIN, Colombia | Solange Bouchard, 54, was a member of the Orchester symphonique de Longueuil even before it was there. Her 25 years in the orchestra make her one of the proud deans of the group. Energetic and passionate, she welcomed the changes that came with the arrival of Maestro Alexandre Da Costa.

“Making a living making music is wonderful, launches the musician of Howick. Me, I wanted to be an orchestral violinist, I was not interested in being in the foreground. It's being part of a whole that stimulates me, my pleasure is when we're together! »

This stimulating together, which has become like a family, has since 2019 been headed by a certain Alexandre Da Costa. A very talented soloist whom Solange has known since he was very young and with whom she studied at the Conservatoire de musique de Montréal.

“It's absolutely impossible not to embark on the intensity of Alexandre, says the mother of three children who have all dabbled in music. He gives so much, he is so generous with his game, his time and his energy that you too want to give everything! »

The violinist could never have imagined one day flying off to South America with the Orchester symphonique de Longueuil. A quarter of a century after her audition, she still pinches herself as she currently plays first violin on the stages of major theaters in Colombia and Brazil.

For the experienced musician – whose father is a fiddler and mother a mad music lover – playing under the direction of Alexandre Da Costa represents a gentle letting go and a kind of momentum from the heart.

“My seated symphony, I do it with other orchestras, explains the one who is called upon to play the violin standing with Da Costa. So, yes, why not do things differently with Alexandre! From the moment I let myself go in there, I followed and since then, I have had a lot of fun. »

It also praises the heterogeneous but complementary aspect of the group of musicians forming the orchestra. Of the 33 participants taking part in this first South American tour in particular, with whom she feels at home. The energy of the young, she says, blends well with the experience of the older ones.

It's moreover with Roxanne Sicard (see other text), the youngest musician of the orchestra, that she shares her desk on stage.

“One of the old timers and the youngest!” laughs the one who was on tour with Bruno Pelletier in 2000 and who will join that of Mario Pelchat in September.

“Fright, I clearly still have it and I don't want that pass, she adds with shining eyes. And then, we always learn from others, even after 25 years and that's what is beautiful and stimulating. »

Roxanne Sicard during the concert in Medellin, Colombia.

At 26, Roxanne Sicard is one of the youngest musicians of the OSDL. She had just acquired her position as a violinist last May when she knew that she was going to fly away with the orchestra for a tour of South America.

At three years old, Roxanne Sicard watched the film Violins of the Heart and it changed her life.

“I always wanted to play the violin, says the young woman from Joliette. I didn't come from a musical family at all, but I had a hard head. For my birthday, my parents rented me a violin and gave me lessons. I never asked myself questions about my career choice. »

After various formative experiences and seven years of study at the Conservatoire de musique de Montréal, she is proud to be part of the Orchester symphonique de Longueuil and to work with conductor Alexandre Da Costa, who has his unique way of conducting. .

The feeling of belonging to this group also gives him great pleasure.

“Alexandre is inspiring,” she says. His personality is so close to the public, that's what's most important. Because what we learn at school is very specific, but we have to reach out to the public. »

It's as much because she always liked to do different things as because she was chosen by a violinist and “complete musician” that she struggles to realize this happens to him.

“I worked really hard to get where I am today, which is what I wanted, even if it was difficult. It's fun to have the chance to do a job you love. Every morning I get up and feel lucky. I can't come back yet! »

The tour in brief…

A first concert in Brazil

After Colombia, the Stradivarius in Vienna tour led by Alexandre Da Costa continues in Brazil. The ensemble shone at the Sesi Theater in Porto Alegre (whose modern version was inaugurated in 1997) on Sunday evening. Porto Alegre is the capital and largest city of the state of Rio Grande do Sul and has 1.5 million inhabitants.

A maestro dressed in clothes by Quebec designers

Alexandre Da Costa proudly wears clothes by Quebec designers during the tour. In Bogota, he was dressed in a frock coat by the Quebec designer of Thai origin Nathon Kong. On the back of the tailor-made jacket for the maestro were the conductor's score and an image of his Stradivarius. In Medellin, he wore – in style! – a black skirt created by designer Denis Gagnon.

Da Costa fils at the controls

< p>At 8 and a half years old, Mattenzo Da Costa already has 5 years of experience in the field of music (piano, vocals, conducting). During the tours – and since he was 5 years old – he has come to share the stage with his famous father to direct La Marche de Radetzky. “I'm very tempted to be like dad,” he said. If he can play the violin and conduct, I can play the piano and sing. My dad inspires me! »