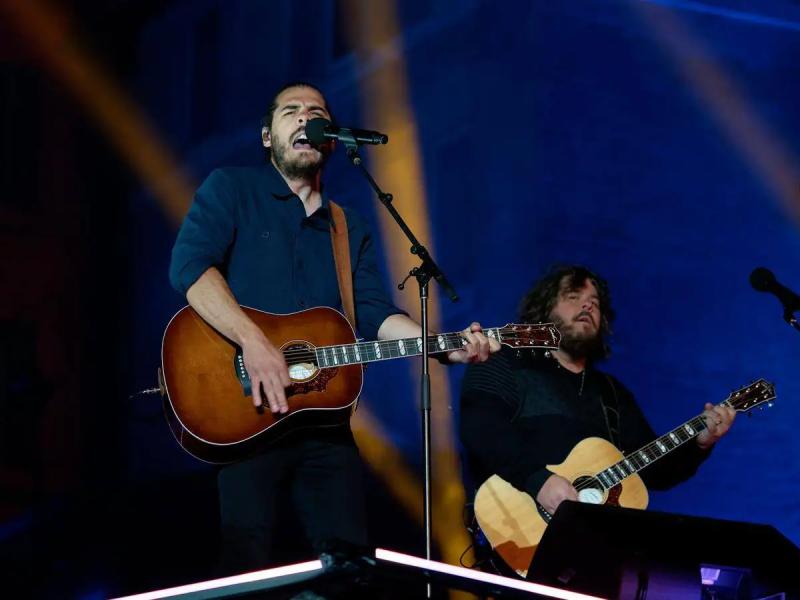 On this evening of electoral debate, the group 2Frères can boast of having achieved unanimity during the presentation of their show Under the same roof presented in front of a full house at the Capitole, last night, in a campfire atmosphere.

Even before pushing their first notes, the two artists received a nice ovation from the crowd. Erik and Sonny probably liked this welcome, they who had a smile on their faces on stage. Moreover, they were impatiently awaiting this moment, because this show was initially to be presented last June, but one of the members of the group had then contracted covid 19. In an interview with TVA Nouvelles before the show, the duo confessed that he was a little nervous, since he hadn't presented an indoor show for several months. He even compared this evening to a premiere.

That said, this break was not noticeable on stage. The two men were very comfortable from the start of their first piece, the catchy song What would you say, which set the tone for an evening that was to be rich in emotions.

Afterwards, the musicians told some family anecdotes. From then on, we could see their complicity. In addition, the public could notice that brotherly love makes two brothers particularly fond of teasing each other in a friendly way. These lyrics followed the song Salut m’man, Un peu de toi, where the crowd joined in by singing the chorus with the band.

Then, Sonny and Erik Caouette sang the key piece of their fourth opus, Under the same roof. Afterwards, the artists put on the pieces Nirvana, Au Sommet, Le temps perdu, Guérir nos memories and Mon ici where Sonny added his touch by accompanying his brother on the piano.

Aware that their job is in so that they are often on the road, the two virtuosos have dedicated the piece For a few hours to people who sometimes have to get away from their loved one for work.

The duo said they had been making music together for 15 years. This complicity was easily perceptible to the ear. The two men are really in unison on the stage. After the song Faut qu’ j’y aille, the artists put on the pieces Great person, Would you like me the same, which tells the story of a breakup. In a completely different register, 2Frères sang their popular song À tous les vents to the rhythm of applause from the public. Le bal, Rien d'autre que toi, Léo Gagné, which was sung along with the audience, were among the other songs the group performed during the evening.

2Frères composed a song about autism, a touching piece that made the knees soften. In order to change people's minds, the duo followed with 33 rpm and a cover of the song Jean le Batailleur.

Throughout the evening, 2Frères told the greats and the small moments of real life. Without a shadow of a doubt, the reunion between the musicians and the public was a great success. The room was packed and people did not hesitate to hum the songs of the popular duo.