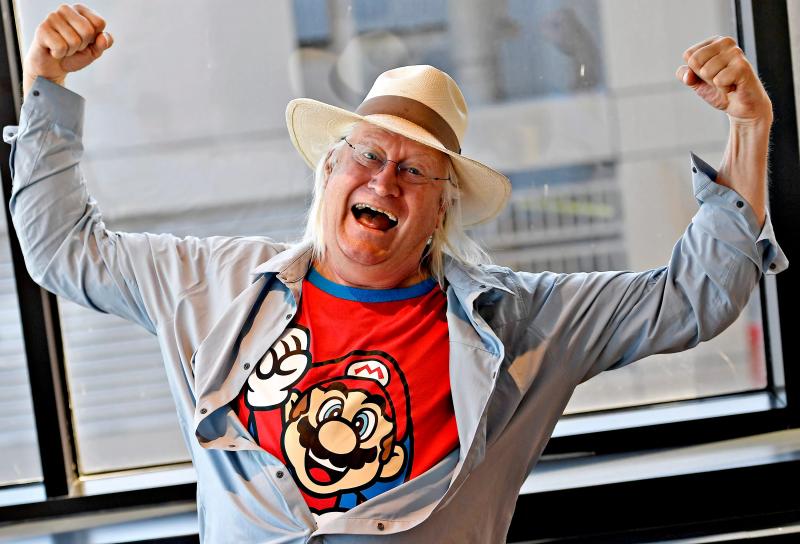 Voice of the character of Mario for 31 years, Charles Martinet continues to enjoy this gift which still brings him so much happiness and which has completely changed his life.

“What I am living is a dream. It's incredible. Mario changed my life,” he said in an interview.

The 67-year-old American actor, who lived in France, is one of the stars of the 8th edition of Comiccon de Québec which takes place Saturday and Sunday at the Center des Congrès.

In addition to the voice of the famous plumber, Charles Martinet is also behind those of Luigi, Wario, Waluigi, Baby Mario and Baby Luigi in the English and Japanese versions of the games of this popular franchise.

An adventure which began on a beach, on a sunny day, in California, at the beginning of the 90s. At that time, Charles Martinet had had small roles in theatre, cinema, on TV and also to do voices.

“I was reading. A friend contacted me by pager. He suggested I go audition in Las Vegas. I had not received an official invitation and I found that it was not professional, ”he said, in French, during an interview in a hotel in the Upper Town.

Two days later, Charles Martinet shows up with his friend in Vegas anyway. A little at the last minute, the producer looked at his watch and agreed to give him an audition.

“I was told it was for a character called Mario for a company called Nintendo. I had never heard of that,” he said.

Charles Martinet says he was inspired by the character of Petruchio from Shakespeare's The Taming of the Shrew that he had played in the theatre.

“I started to improvise the making of a pizza and a lasagna while having fun with the names of the foods and the words sausages, pizza and pasta. At one point, I was asked to stop talking. We were at the end of the recording tape,” he said.

The tape ended up in the Nintendo offices in Seattle. It was the beginning of an adventure that took him all over the planet. “I have just come from stays in the United Arab Emirates, Egypt and Iceland. I spend 250 days a year in hotels. I travel because of Mario's character and also because it's a passion,” he explained.

Charles Martinet still enjoys doing the voice of Mario and other characters from this universe.

“I think and I dream in Mario. I sometimes talk to myself with the voices of these characters. They give me joy. People ask me to do this voice and I always accept. I love seeing smiles appear on people's faces. It amuses me infinitely, ”said the Florida resident.

Smiles that are rewarding and that come from the little ones and also from the older ones who grew up with the friendly mustachioed plumber.

“It's always nice to know that we have an impact on people's lives. It touches the heart,” he said.

In a world, he says, where everything is horrible and everything is collapsing and where democracy is crumbling more and more, Charles Martinet likes to bring happiness.

“Mario represents, for me, what it takes to be a man. He is faithful, cheerful and optimistic, “he dropped, specifying that he was not at all like Luigi, before launching a genuine” Yahoo! with Mario's voice.