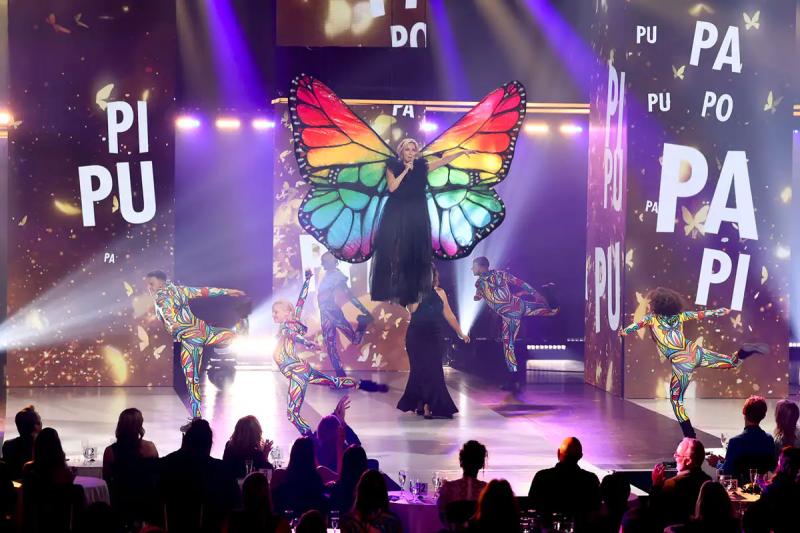 “That's How I Love You”, “Audrey Came Back” and “We” were crowned Best Drama Series, Best Comedy and Best Annual Drama Series respectively at the 37th Annual Gémeaux Awards, Sunday, in a formula where the pandemic was no more than a painful memory.

The work of François Létourneau, praised during the Opening Gala in the afternoon for the latter's texts as well as for the production by Robin Aubert and Jean-François Rivard, obtained a total of nine Gémeaux out of the 13 nominations for in which it competed, making it the most successful production this year by members of the Academy of Canadian Cinema and Television.

“Audrey is back”, a series available on Club illico and also nominated 13 times, obtained a total of five Gemini, including best comedy, best text: comedy for Florence Longpré and Guillaume Lambert and best direction: comedy for Guillaume Lonergan at the Gala d 'opening. In the evening, during the main ceremony hosted for the ninth time by Véronique Cloutier, Denis Bouchard and Florence Longpré went on stage to give their respective thanks after winning the trophy for best male and female lead role: comedy. Florence greeted the two Guillaumes by describing them as incredible work accomplices and shared her prize with Josée Deschênes who plays her mother in “Audrey is back”.

The prize for the best annual series is went to “We” from Club illico, which was disconnected after just one season. The latest episodes of this work from Duo Productions are expected on the platform this fall. “Us” also earned Élise Guilbault and director Yannick Savard an award at the Opening Gala.

“La Tour” has a new star trio – Gildor Roy, Hélène Bourgeois Leclerc and Alexandre Barrette – but it is to the former captain, Patrick Huard, and his team that we gave the prize for the best program or interview series or talk show. The comedian was also named best host in this segment in the afternoon.

Guy Jodoin – with sunglasses – snatched the award for best male lead: annual drama series for “Alerts” and talked about perseverance, he who is best known for his comedies. Marina Orsini can be consoled for the end of her series “Another story” since her peers have awarded her the same Gemini in women.

The same balm, moreover, for Sébastien Diaz and Bianca Gervais, who add the statuette of the best animation to their mantelpiece: service magazines for “Family format”, the eighth season of which will have been the last on Télé-Québec. Warmly applauded, it was news anchor Pierre Bruneau, as a “news legend”, who handed the trophy to the couple.

Finally, in terms of entertainment, the popular France Beaudoin was praised for her work on “Live from the universe” – an event which was also hailed by the audience award – as were Jean-René Dufort for “Infoman 2021” and Pierre-Yves Lord for the game “100 geniuses”.

Host Véronique Cloutier offered a “scandalissimo” opening number, arriving without a smile and trying to be more biting in case it was her last gala… Guy Jodoin interrupted her on stage by pointing out that its opening was “beige”…Véro went back to natural and offered a choreography showing that TV flutters…on all platforms, supported by the voice of the great winner of “Canada's Got Talent”, Jeanick Fournier. Among the strange moments of the evening, there was the unexpected intervention of Guillaume Lemay-Thivierge on stage, who spoke about the importance of voting…

“My two years at “La Tour” come to a close. […] I especially want to thank my permanent team which is behind all my projects, Nathan Jean-Huard, Jessie Huard and Anik Jean. I want to thank them with all my heart for always being there in my madness, for always backing me up, for always supporting me and for making me, every day, a little better artist, and I also hope , a slightly better human being”, said Patrick Huard, whose “La Tour” was crowned best program or series of interviews or talk-show and who received the title of best host in this category at the Gala d' opening.

“The adventure of 'Audrey is back' is an incredible adventure. […] Josée Deschênes is a being of generosity and unconditional love, she is the person who continues to play after we have said “cut”. Josée, it was such a pleasure to play this with you, it was a pleasure to have a mother even if it was for a role, you are warm, I love you, you are brilliant, I share this award with you,” said Florence Longpré, hailed for her acting and her lyrics of “Audrey is back,” written with Guillaume Lambert.

< p>“All the actors will tell you that when it's a good text, 50% of the “job” is done, so thank you Florence Longpré and Guillaume Lambert. After that, it takes someone who is able to take what is written on a sheet and put it on the screen, that's Guillaume Lenorgan. You took me into emotional territories that I had never explored. You are priced with me for the rest of your life!” said Denis Bouchard for his award for leading male role: comedy.

“Liv and Bowie, at home, this show would never have existed without you,” said Sébastien Diaz, Bianca Gervais adding, “you are our muses!” The couple won the prize for best animation: service magazines for “Family Format”, which bowed out after eight seasons on Télé-Québec.

“It's a big surprise, we're so proud of this series,” said Anne Boyer, producer of “Nous”, a series that was crowned best annual drama series.

“When I read that, I liquefied. Sometimes, to feel business, I re-read [the script]. It cost me a box of Kleenex. […] It was a tailor-made character for me”, said Sylvain Marcel, rewarded for his play in “Virage”.

“It's a prize that belongs to the whole team of” Direct from the universe “. […] I would also like to share it with my extended family, from whom this concept originated, ”said the host, accepting the prize for best animation: series or variety special. At the very end of the gala, “Live from the Universe” received the Gémeaux Audience Award Cogeco Fund.

“Thank you to everyone for letting us do our nonsense for so long,” said Jean-René Dufort, winner of the award for best animation: humor for “Infoman”, in a video, he who is in London with his accomplice Chantal Lamarre to cover the funeral of Queen Elizabeth II in her own way.

“The word of the day: perseverance”, said Guy Jodoin after being rewarded for his dramatic play in “Alerts”, he who is better known for his comedies.< /p>

“It was a great privilege, quite a trip. […] Bravo everyone, we do so much exceptional TV, I am very proud to be part of it, “said the actress after being rewarded for her role of Anemone in” Another story “, series that has bowed out.

“It's Philippe Falardeau's fault. If he hadn't been there, I wouldn't be here. I may have seemed brilliant in this role, but it was you who polished it,” the actress said of her role in “Le temps des raspberries”, which earned her the Gemini for best leading role. female: drama series.

“It's been a long time since I've had this much fun playing something,” the actor said of winning the Gemini Award for Best Male Lead: Drama Series.

Best male lead: comedy – Denis Bouchard for “Audrey is back”

Best Animation: Series or Special of varieties – France Beaudoin for “Live from the universe”

Some prizes awarded in the afternoon:

Best comedy – “Audrey is back”