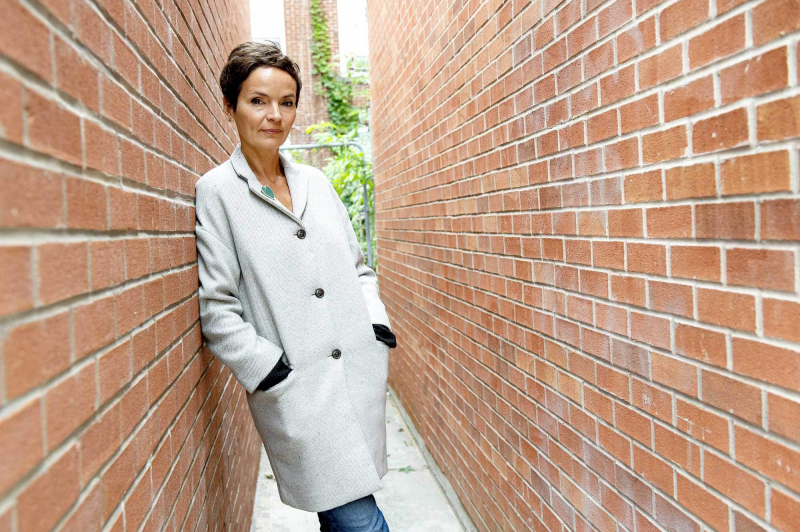 Renowned filmmaker and author of the cult novel The Fleeing Woman, multiple award-winning, Anaïs Barbeau-Lavalette explores the twists and turns of romantic encounter and feminine desire in his fourth novel, Woman River. This magnificent, poetic novel is both an ode to freedom, the expression of carnal desire and a magnificent love song for the St. Lawrence River.

The novel, which takes root on an imaginary island somewhere on the St. Lawrence, describes the encounter between a moving woman and a painter who tries to reproduce the blue of the river. On the shore, there is a moment of magic… and the little sparks arise between them.

Anaïs Barbeau-Lavalette, inspired and inspiring writer, reveals in her novel all the intensity of feminine desire. A desire that takes many forms, modulates according to encounters and events, takes its rightful place.

In an interview, the writer explains that River Woman represents the end of a cycle, like a third and final ricochet after The Fleeing Woman.

“At the bottom of all this there is a recurring desire to write on what makes us stay, on what makes us leave. Of course, I think it concerns everyone. Me, through my story, that's what worries me.”

Another question, so fundamental, also affects her: what makes a meeting?

“What makes someone who is on your path, at a given moment, will become someone unforgettable? There is something in the meeting which for me is a mystery. I wanted to think about that.”

Anaïs Barbeau-Lavalette considers that feminine desire is one of the last taboos.

“I learned very young to be desired, but so late to be desired that for me, it was part of an apprenticeship that arrived late and which is still singled out. As if to desire, for a woman, was condemnable, as if it were relegated a little to wantonness, to the lowlands. It is especially not associated with a mother.”

“I feel like there is a way to be a mother, to be a woman, to be desirous today. And let it be a pride, a trait of character, and that we talk about it. Not necessarily that we brandish it, but especially not that we are ashamed, in fact. It's part of what qualifies us as alive, and we have to reclaim the beautiful grand meaning of that word.”

Even in literature, women have a rather passive role, on the desire side, she points out.

“It's steeped in history. The books we still read – Shakespeare, Flaubert, Stendhal – young people study that at school. They are women who wait for the man, who wait to be chosen and who, in the meantime, are passive. Making desire active is part of my qualities, like being patient, being gentle, being kind, being intelligent. Well, I'm also desirous.”

She doesn't think she's the only one who thinks that way.

“I think we're full, like that, it's just that indeed, we can be singled out. It is still connected to women of bad life. There is something very medieval in our way of considering feminine desire.”

This sort of immense mystery that is love is also at the heart of River Woman.

“People explained to me that for the bereaved, like the great pain in love, the brain is so well made that it makes us see the lost person for months, even years, afterwards. We hallucinate it, because it protects us from the violence of loss. The brain stretches the pain a little, like the tail of a comet.”

“Offshore, the river touches the sea. At the confluence of the two waters, the colors slowly mix .

After a few kilometers, they become one and the same color, new. This aquatic meeting point, where the two waters merge, is called “the nuptials”.