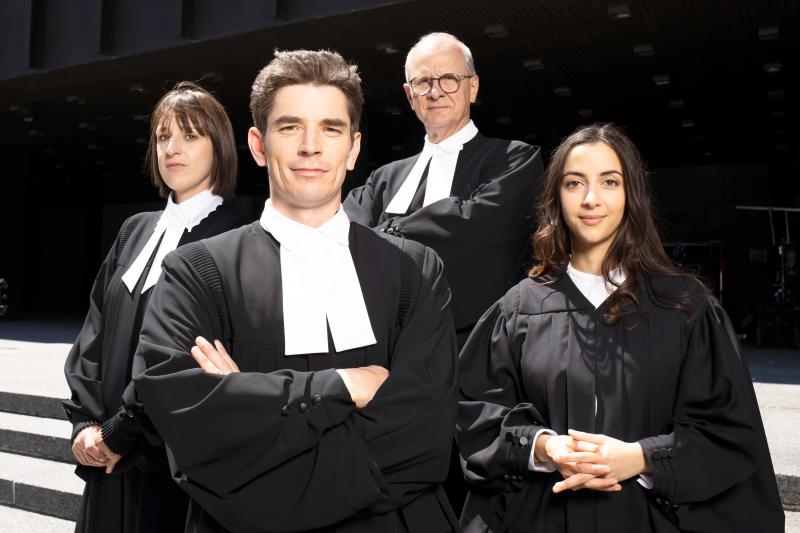 Nadine Bismuth devours court series. It is for this reason that she agreed to dive into the adventure of the daily Indéfendable, a highly anticipated series on TVA. After delving into the psychology of the characters in In Therapy and the caregivers in Help by Béatrice, then probed the maze of lovers in A family bond, the author invests a law firm with a certain intention of restoring the image of the defense through multidimensional characters and gripping stories. A loaded mandate whose first testimonies are promising.

When one dives into an environment like the law with its terms, its procedures, should one, as an author, make a immersion?

Richard Dubé, who is the creator of the series, is a criminal lawyer. He is the one who writes all the trials, the progress of the legal path, who describes how the lawyers build their cases for their clients. The legal, he takes care of it. We authors dramatize what he gives us. We also develop the personal life of the characters. We come to enrich the stories. I do the synopses that dictate the evolution of the plot. The authors (Mathieu Denis, Stéphane Hogue, Erika Mathieu, Daniel Chiasson, Émilie Ouellet, Donald Bouthillette, Alexandre Laferrière) leave with an episode. Our script editors (Pierre Houle and Marc Bisaillon) review the texts. Then I make sure that everything is coherent, I ensure the uniformity of tone, I rewrite dialogues if necessary. It's teamwork. It's a universe at the level of storytelling which is very engaging.

The series begins with a catchy scene that will open on a trial. Was it a structure that we are likely to find regularly in the season?

We always have a main case, a criminal trial. We will have nine great causes that will span a dozen episodes. Then there are secondary cases in the Court of Quebec for misdeeds that are less spectacular. What is special is that each time we will have different points of view of the crime scene. That of the victim, that of the aggressor and of the witnesses. The spectator finds himself in a role of the jury and will have to choose who is telling the truth. It's a very catchy way of doing things that keeps the suspense going until the end.

We are often shown the lawyers like rebellious, ultra-confident people, above the fray. To follow them on a daily basis, the characters must be endearing. How did you do it?

The characters of André Lapointe (Michel Laperrière) and Léo MacDonald (Sébastien Delorme) were already well established in the concept of Richard and Izabel (co-designer and producer). Defense lawyers have a bad reputation in general. We wanted to go beyond the prejudices that they defend aggressors and that they are there just for the cash. They're arrogant in court, but that's part of the theatrics. On the contrary, they are full of empathy and seek a certain justice. Sometimes their job is also to show the Crown how to do their job well. They defend the principles of rights. The characters have their lives in the office, but also in private. It helps to make them endearing. It adds a layer to them. It allows you to see what their life is like when they come home at night.

From the first episodes, there are excellent performances. Were you surprised to see the characters come to life in these exceptional circumstances?

I have seen 40 episodes and I can say that I am often moved. The trial of Pierre Poirier (Hubert Proulx) made me cry even though I know all the texts. Another cause with a teenager (Emi Chicoine) touched me a lot. I know that on the set it was very strong too. Me Desjardins (Anne-Élisabeth Bossé) who is at a crossroads, I find her wonderful. Me Legrand (Martin David Peters), our villain, pays so much. All are extraordinary. This is an office I would love to work in!

In recent years, we have witnessed a loss of confidence in the justice system. Social networks have become a people's court. Do you think the series will shed new light and restore the profession?

We will never get tired of questioning the DNA of an institution. It's normal to doubt her, to question her. It won't change. We have no pretensions at this level, but I think the series will teach people a lot about the legal world.