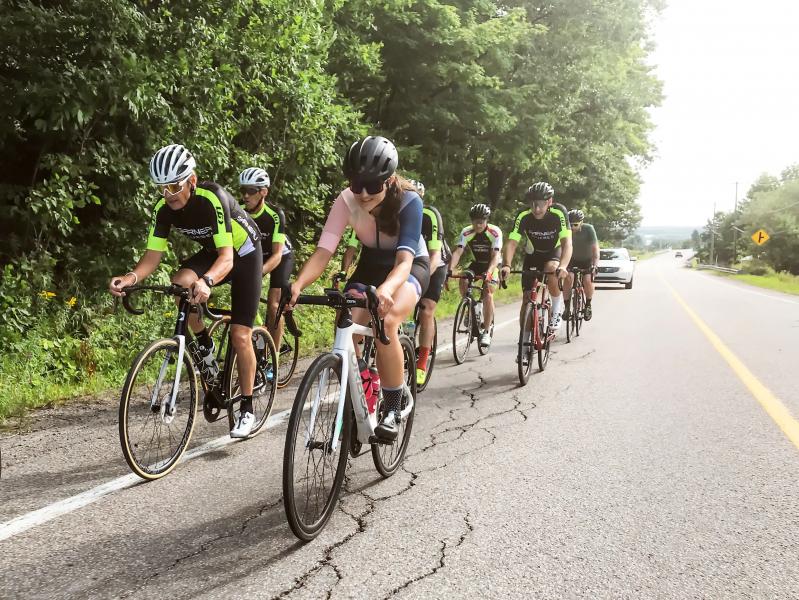 Being part of a cycling club to travel the roads and trails by bike in a group has many advantages, the most important of which is certainly to nourish the pleasure!

They are bike lovers who share the same passion for this sport, whether on the road, in the mountains, on gravel, in cycle touring mode or on a bike with oversized tires. They come together to cycle recreationally, while taking training seriously. Their reasons for joining a club (often for a small annual contribution) are varied and could inspire other cyclists to do the same.

“The only reason we pedal is for fun,” says Louis Garneau, president of the Louis Garneau Club international (road bike) and Club Garneau Québec (mountain bike). “The pleasure of training, of getting in shape, of decompressing, of getting some fresh air, of meeting people, of telling anecdotes…”, he says, while taking care of body and mind. Then over the miles traveled, friendships develop, experiences are shared, new destinations are offered, advice is passed on and social gatherings are organized.

“Safety and pleasure, we can't separate that,” says Mr. Garneau, whose road club is the only one to offer a supervision service using an escort car for each group of 15 cyclists, encouraging motorists to be more vigilant. Some clubs use supervisors or platoon captains, for example, to increase safety, but in all cases, the simple fact of riding together makes it possible “to not feel alone if something goes wrong,” explains Martine Rancourt, vice-president of Club sur 2 roue Beauce.

When, on certain days, the motivation does not reach the height of the cyclist's calves, knowing that a group is counting on his presence, that he will find comrades and that the pleasure is assured, encourages him to grab his handlebars. The feeling of belonging to a group can drive many miles!

“At the beginning, we divide the groups according to the expected caliber of each and the distances to be covered”, explains Claude Durocher, communications manager for Sport-en-Tête, thus allowing to go faster, to take advantage of the aerodynamics of the group and exert less effort.

For Les Chèvres de montagne, an active community pursuing the mission of democratizing outdoor activities among women and making them more accessible to them, their mountain bike clubs also allow women to develop their skills, learn to their own way, to work on the basics, practice techniques, gain confidence and become more independent with the help of a coach, explains co-director, Émilie Richard.

On the road, when each member of the group takes over in turn at the head of the peloton and the energy is transmitted through the cyclists, fatigue is less present and the rides are prolonged, says Ms. Rancourt. We are going further, she notes. “We dare, because we are not alone. We discover regions, places that we do not know”. Cycling clubs also facilitate the initiation to travel on two wheels for those who want to travel without venturing alone.

ELECTRIC BIKES PROHIBITED IN THE MOUNTAINS

To ensure the safety of their customers and the quality of the trails, the five centers of the Quebec Mountain Bike Alliance (Empire 47, Le Massif de Charlevoix, Mont-Sainte-Anne, Sentiers du Moulin et Vallée Bras-du-Nord) regulate the practice of electric mountain biking by only accepting class 1 electric bikes equipped with a “pedal” motor. These are bicycles with a speed limit of 32 km/h, whose motor immediately ceases all electric assistance when this speed is reached. The electric motor located directly on the pedals provides personalized propulsive assistance measured according to the pressure exerted on the pedals, then allows greater control when riding.