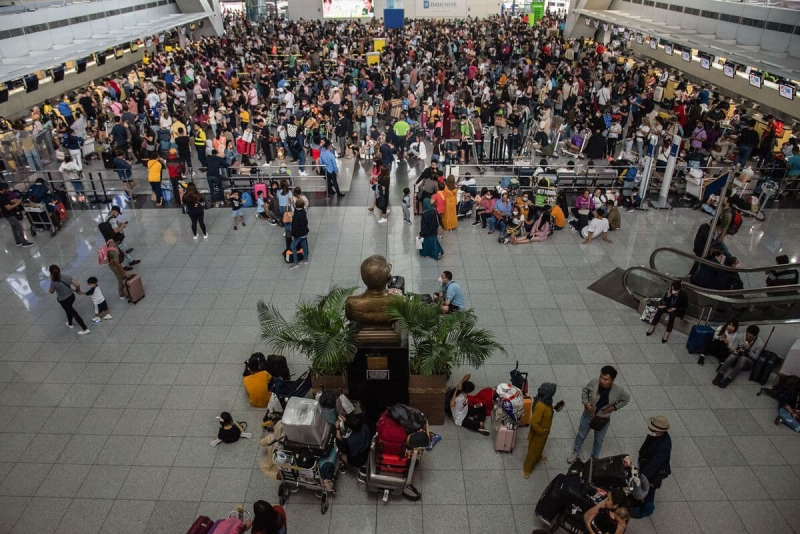 Tens of thousands of travelers were stranded at airports across the Philippines on Sunday following a power outage that knocked out communications equipment and the principal's radar system. between them, in Manila, leading to the cancellation, delay or rerouting of hundreds of flights.

In total, more than 360 flights scheduled to arrive in and depart from the Philippine capital have been affected, with consequences for around 56,000 passengers, according to airport authorities

And this after the latter had detected in the morning a “technical problem” involving the air traffic management center of the national and international airport of Manila.

A breakdown that occurred at a time when many travelers were returning to the capital after the Christmas and New Year holidays.

There followed scenes of chaos at the boarding counters where thousands of people tried to find out when their plane could take off or to get a new ticket.

Others who had boarded before the announcement of this technical incident waited hours before having to disembark.

Sector officials did not initially specify the cause of the problem.

But Transportation Department Secretary Jaime Bautista later said a power outage caused the air traffic management center, which controls incoming flights, to stop working. and initially, this having caused the interruption of radio communications, via the internet and the operation of radars.

Added to this was “the overvoltage due to the power failure which affected the equipment he continued.

The air traffic management system was partially restored around 4:00 p.m. (0800 GMT) and planes then began to take off and land again in Manila, airport authorities said. diversions are simple precautionary measures to ensure the safety of passengers, crews and aircraft,” assured the Civil Aviation Authority of the Philippines.

Many passengers protested against this malfunction and the lack of information on site.

A woman who was to leave for Singapore said she sat on the plane on the tarmac for several hours before she was able to get off and was offered a hotel room.

“We were told that 'there was a complete breakdown of radio communications at air traffic control,' she told AFP.

Philippine tycoon Manny Pangilinan tweeted that his plane from Tokyo to Manila had was diverted on a flight to Tokyo-Haneda airport due to a failure “of radar and navigation facilities”.

“Six-hour flight for nothing but inconvenience to travelers and losses for tourism and business are horrible,” he lamented.

In Manila, a passenger, Daryll Delgado, told AFP that she was able to rebook for later after an “infuriating” experience.

In Davao (south), travelers were advised “not to go to the airport” but many discovered their flight was canceled a when they were already recording, according to an AFP journalist.