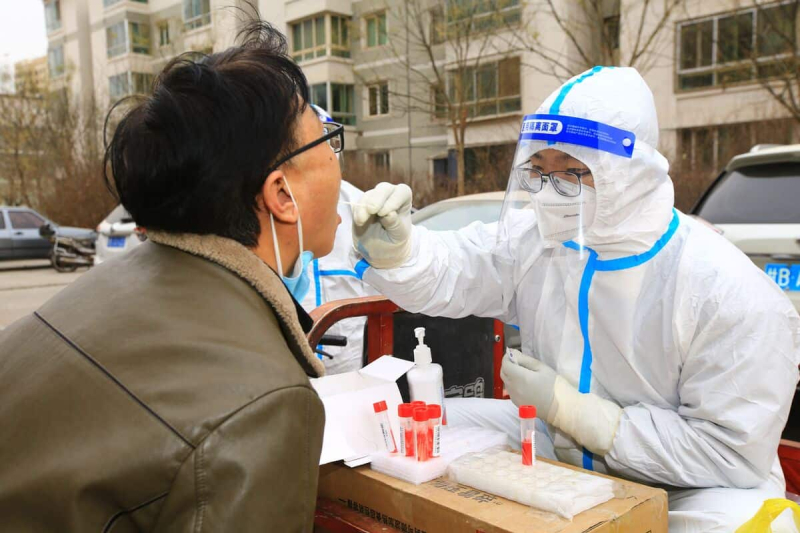 Zhengzhou, a city in central China that hosts a huge iPhone factory, on Thursday ordered the confinement of six million people after an outbreak of COVID-19 led to violent protests at the site industry.

Hundreds of workers marched past the factory on Wednesday and faced police, who were armed with batons and dressed in full white protective suits.< /p>

In the aftermath, Zhengzhou authorities ordered a major screening campaign in several districts of the city. These neighborhoods are locked down for five days from Friday midnight.

Dwellers in the city center are no longer allowed to leave the area without a negative PCR test and permission from local authorities. They are advised not to leave their homes, “unless necessary”.

These measures affect several neighborhoods, affecting about half of Zhengzhou residents. They do not cover the iPhone factory area, where workers have already been under restrictions for several weeks.

A worker told AFP that the protests started due to a controversy over the amount of a bonus promised to workers at the factory, owned by Taiwanese giant Foxconn, Apple's main subcontractor.

According to this worker, the bonus would have gone from 3000 to 30 yuan (from 400 to 4 euros), which would have caused great dissatisfaction among the staff.

Several employees are also exasperated by the “chaotic” living conditions at the site due to anti-COVID restrictions, said this worker, who wishes to remain anonymous to avoid possible reprisals.

Foxconn apologized on Thursday, saying a “technical error” in its payment system was the cause of the bonus problem. The group said it “fully understands” workers' concerns.

“The company will also do its best to proactively resolve concerns and reasonable requests from employees,” the Taiwanese company said.

The American giant Apple, whose iPhone is the flagship product, told AFP on Thursday that it has representatives currently present on the site.

The Californian group is “examining the situation and working closely with Foxconn to ensure their employees' concerns are addressed,” he said.

Under China's strict “zero COVID” health policy, the slightest increase in cases leads to the closure of entire cities and the placing of those who test positive in quarantine.

But this strategy is causing today the weariness of a large part of the population. And the number of infections is skyrocketing.

The Ministry of Health on Thursday announced a new record for the number of people who tested positive in 24 hours, at 31,444 local cases – including 27,517 asymptomatic.

This number exceeds the previous record (29,317) recorded in mid-April, when the Shanghai metropolis was confined.

These figures however, appear weak in view of the Chinese population (1.4 billion inhabitants) and the records observed in Western countries.

The capital now requires a negative PCR test of less than 48 hours to enter public places such as shopping malls, hotels and administrative buildings.

Many schools have switched to distance learning. Most restaurants, bars and businesses are closed.

The manufacturing center of Guangzhou (south), the epicenter of the current wave of COVID, has built thousands of temporary hospital rooms to accommodate patients .

The government announced on November 11 an “optimization” of anti-COVID restrictions, with the relaxation of several measures, including the reduction of the duration of quarantines, in particular for travelers arriving from foreigner.

But Shijiazhuang, a township neighboring Beijing that was considered a pilot city to test this reopening strategy, has backtracked on most of the easing – as have other localities.

“The road to reopening could be slow, costly and bumpy,” Ting Lu, economist for Nomura Bank, said in a note.