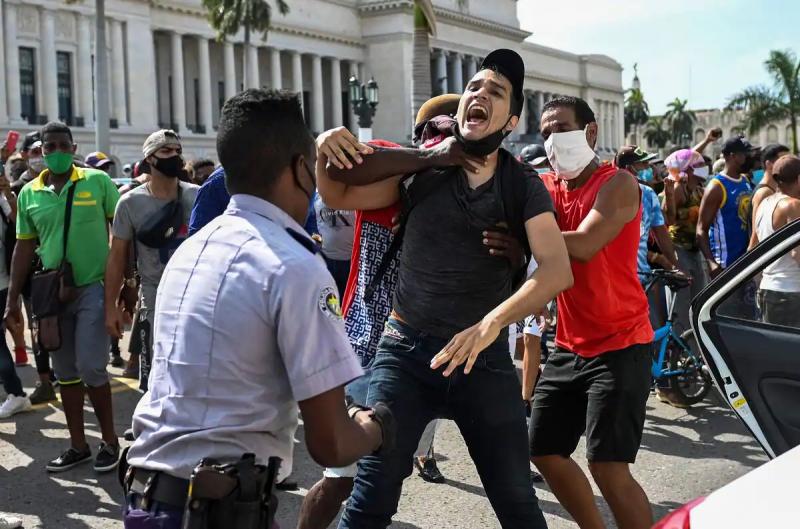 More than 70 people accused of taking part in anti-government protests in Cuba in July have been sentenced, the General Prosecutor's Office announced on Wednesday, bringing the total number of Cubans sanctioned for taking part in the protests to 488. challenge.

These final sentences were handed down by various courts in Havana, Santiago de Cuba (east), Matanzas (west). They concern “74 accused” of sedition, public disorder, contempt, and attacks on authority, according to the prosecution.

Among the 74 persons convicted, 56 were given sentences ranging from 10 to 18 years in prison, 18 were sentenced to community service, including 12 minors.

The convicts “undermined the constitutional order and the stability of our socialist state,” added the General Prosecutor’s Office.

On July 11 and 12, 2021, thousands of Cubans took to the streets in several cities across the country shouting “We are hungry”, “Freedom”, “Down with dictatorship”. The demonstrations resulted in one death, dozens of injuries and 1,300 arrests.

Several hundred people are still detained, according to the association Justicia 11J.

The Cuban authorities claim that these demonstrations, the largest recorded since 1959, were orchestrated from the United States which, like the European Union and human rights organizations, is calling for the release of all ” political prisoners.”

A total of 488 people have been sentenced, some of up to 25 years in prison, according to judicial authorities. In January, the government had reported 790 defendants, including 55 minors.

In a tweet, the United States Embassy in Cuba referred to the situation of opponent Daniel Ferrer, detained since July 11 in Santiago de Cuba.

“Why did the Cuban regime prevent J. Daniel Ferrer from speaking with his family for 17 days, including Father's Day? José Daniel and all arrested July 11 protesters must be released and return home to their beloved families,” the embassy said.

In May, ten months after the protests, the Cuban Parliament “unanimously” approved a new penal code making dissent more difficult.