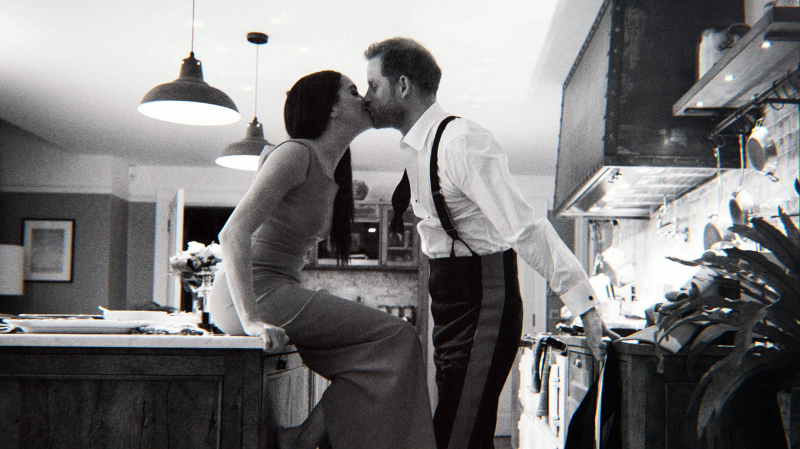 Fans and critics alike of the royal family and the power couple formed by Harry and Meghan are eagerly awaiting the release of the documentary Harry and Meghan on Thursday. The first three episodes will drop on Netflix on December 8 while the final three episodes will be released on December 15. Here are 8 things to know about this already explosive work.

1) Even before its release, The Daily Mail devotes 6 pages to the documentary

'Sussex Fury: Netflix denounces a war against Meghan'. The front page of the British newspaper The Daily Mail, featuring a photo from the documentary series showing Meghan in tears, opens a six-page file – unflattering for the couple who left the royal family in 2020 – taken from the two trailers for the series already unveiled to the public. We dare not imagine what they will publish when the complete series is broadcast.

2) The British tabloids are already attacking the couple

'A long moan', 'Harry and Meghan's attempt to hedge Diana's legacy', 'the startling realities behind Netflix's emotional images', 'They are manipulating an entire nation while lining their pockets with their misery”: The Daily Mail is not the only tabloid trying to discredit Harry and Meghan. The Sun, The Daily Express and The Daily Star have all published accusing files and front pages such as Sex, Lies and Videotapes, A Kiss meaning war and Harry, do you hate your family so much?

3) The power to tell their own story

“Nobody knows the whole truth. We know the whole truth,” said Prince Harry, staring at the camera in one of the trailers released by Netflix on Monday. “Who better than us to tell our own story?” Adds his wife Meghan further. If the couple chose to tell their love story and the difficulties overcome, it is with the aim of putting an end to speculation and regaining power over their own experiences.

These black and white photos of the couple reunite in the trailer for the Netflix documentary series Harry and Meghan.

Since leaving the Royal Family, Harry and Meghan have signed lucrative deals estimated at over $100 million with Netflix and Spotify. Prince Harry will also publish his memoir titled The Substitute, which is slated for release next January. Critics of the couple now living in California see it as manipulation and on the part of those whom some call “new Kardashians” who would take advantage of the unpacking of their private lives to “fill their pockets.”

< h3>5) The revelations about William and his wife Kate

One of the trailers features black and white photos of the once-royal couple. Then, a single snap shows Harry's brother William and his wife Kate with particularly hostile faces, following an image of Meghan wiping away tears. We can therefore expect shocking revelations from Harry and Meghan about their notorious coldness with Harry's brother – now heir to the Crown – and his famous wife.

6) The similarities with the history and fate of Diana

It's hard not to see the many similarities between the story and the tragic fate of Harry's mother, Lady Diana, and that of her stepdaughter Meghan; especially when you see the images of the horde of paparazzi relentlessly chasing her and hear her genuine and many fears for her own safety and that of her family. “I was terrified, I didn't want history to repeat itself,” says Prince Harry, 38, while deploring “the pain and suffering of women who marry within the institution”. All against a backdrop of images of his famous mother killed in a car accident in 1997 while being chased by paparazzi.

7) A history of racism

< p>Accusations of racism by Meghan – who is of mixed race and whose mother is African-American – have been known since the couple's exclusive interview with Oprah Winfrey in 2021; they had accused of racism a member of the royal family who would have wondered, before his birth, about the skin color of their son Archie. It looks like this important subject (often considered taboo in England) will be covered extensively in the upcoming documentary series, judging by the two trailers already heavily addressing the subject.

This is how Prince Harry describes the actions of the royal family and the British tabloids towards his couple and, particularly, towards his wife Meghan. “I realized that they were never going to protect us”, explains in turn a tearful Meghan. Already in the full trailer, the couple, some of their friends and family members who have never spoken publicly before denounce “the suffering generated by the firm”. “It's hate, it's racism,” says a black man in the video extract.

The first three episodes of the documentary series Harry and Meghan will be dropped on Netflix on December 8th and the three final episodes on December 15th.