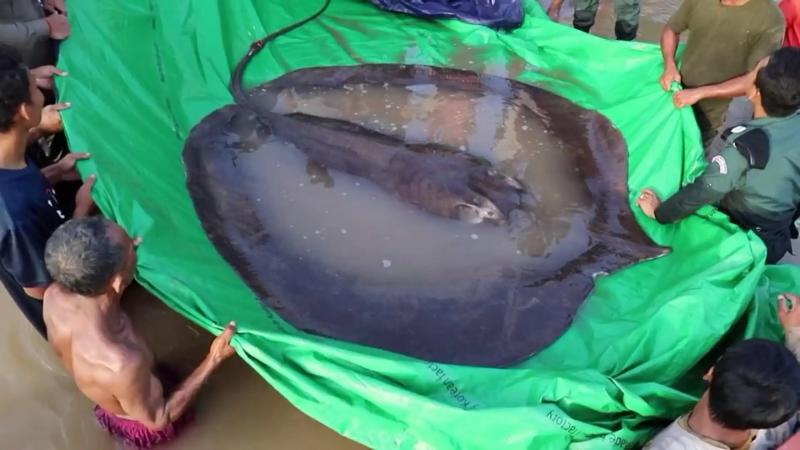 A Cambodian fisherman has caught the largest freshwater fish on record in the Mekong, according to scientists, a giant ray weighing 300 kilos (661 pounds).

Named Boramy – 'full moon' in the Khmer language – because of her shape, the four-metre-long female was released after receiving an electronic implant to allow her movements and behavior to be monitored.

Captured in Stung Treng province in northern Cambodia, it weighed more than twice the weight of an average lowland gorilla, the scientists said.

“In 20 years of research (…), this is the largest freshwater fish that we have encountered or that has been documented in the whole world”, noted Tuesday in a press release Zeb Hogan, director of Wonders of the Mekong, a US-funded conservation project.

“This is an absolutely stunning discovery that justifies efforts to better understand the mysteries surrounding the giant stingray. freshwater,” he added.

Threatened by overfishing, pollution and habitat loss, the species is protected.

< p>Boramy broke the record for a giant catfish weighing 293 kg which was caught in 2005 a little further upstream in northern Thailand.

The Mekong, one of the most long islands of Asia (4,350 kilometers long), is home to the most important aquatic biodiversity in the world after the Amazon, with more than 1,000 species of fish.

Gigantic specimens such as catfish giant or the giant barbel which can reach three meters and weigh up to 300 kilos also inhabit its waters.

The river, which reaches 80 meters in depth in places, could shelter even larger varieties, d 'according to scientists.

Vital for the survival of millions of people in Southeast Asia, the Mekong and its fauna are threatened by the dozens of dams built by Beijing in China, Laos and Cambodia .

Pollution is another cause for concern.

Plastic litter has been spotted even in the deepest areas of the river a as well as “ghost nets” lost or abandoned by fishermen in which fish can become trapped.