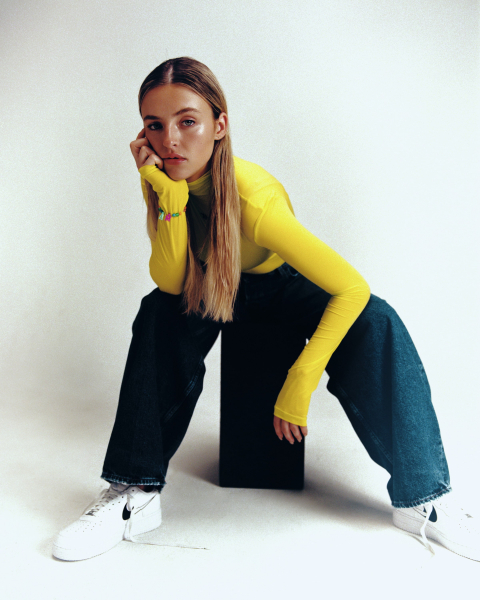 To mark the start of the first theatrical tour of her career, Alicia Moffet wanted to celebrate in style. Next week, she will give a concert at the MTelus with several guests, including FouKi and Zach Zoya. “I wanted it to be like a big family party,” says the 24-year-old singer, who will also have to combine her tour with her role as a young mother.

What is your state of mind at the moment a few days before the launch of the tour Intertwine?

“You would have spoken to me a week ago and I would have told you that I am in total panic! [laughs] Because we started practices last week and I'm still the same. The two times I put on a show, before starting practice, I was in a big panic. I think it's going too fast. But as soon as I start practicing, I become confident. Today, I will tell you that I am really looking forward to it. I'm so happy with the new form of the show. It will be very different from the shows of the past year. »

What will be in this new show?

« There will be songs from the album of the year and my first album. There will be segments that shed light on my background and my beginnings in music. There will also be medleysand guests. For my tour, there will be Pelch, which is my first part. In Montreal, guests will include FouKi, Jamie Fine, Zach Zoya and Ryland James. »

Which musicians t will accompany on stage?

“These are my four musicians from last year, whom I love with love. There is my drummer (Olivier Savoie Campeau), my guitarist (Vincent Gendron), my pianist (Gabriel Thibault) and my bassist (Maxime Lévesque). These are all musicians I worked with in the past, before my tour. My bassist and my pianist, I went to high school with them. My drummer and my guitarist, I was with them on the tour with Kevin Bazinet when I was younger. I drafted them all so that we can continue to work together. »

Your tour starts directly with the big concert in Montreal, February 2 at the MTelus. Was it intentional not to play elsewhere before?

“It’s no coincidence. We wanted to start it strong. I invited many of my friends. I wanted the first show to be like a big family party to celebrate the start of the tour. »

This will be the first theatrical tour of your career. How do you envision that?

“I really feel like I'm going to have a blast because I have a great gang. My boyfriend will come often. I will bring my daughter some evenings and also my dog! We are really happy with the ticket sales. There are several rooms that are full. It bodes very well. »

You have a three-and-a-half-year-old daughter, Billie Lou. How are you going to combine your tour with your life as a mom?

“I'll take it as it comes. Number one, I'm in joint custody with my ex. There are many times when I will not have it with me. The times I have it, for sure I bring it [on the road] with my little nanny who follows us when I'm in show. The reality is that when I have a show, it's late at night. The rest of the day, I have a little sound test. Otherwise, I can hang out with Billie. I bring her into my world. I want her to see my universe. As soon as I can bring it, I do. »

Are there any plans for shows outside Quebec this year?

“Right now, we are really focusing on the Quebec tour. The truth is that I think I have never had so many projects at the same time. There are so many cases this year that I am working on. These are projects that will be announced later. There are things that are completely in other spheres than music. I'm also working on new merchandise that will be exclusively sold at the shows. »

Would you like to do other jobs in the next few years, such as acting?

« I actually have things that here and there… To be continued! It's really something that interests me. For the past few days I've been making stories on my Instagram of me doing weird voices and people love it so much. I have a hidden talent in imitation and acting that I have never pushed. I said to myself that this year, I wanted to develop that, to be a voice actress or an actress. »