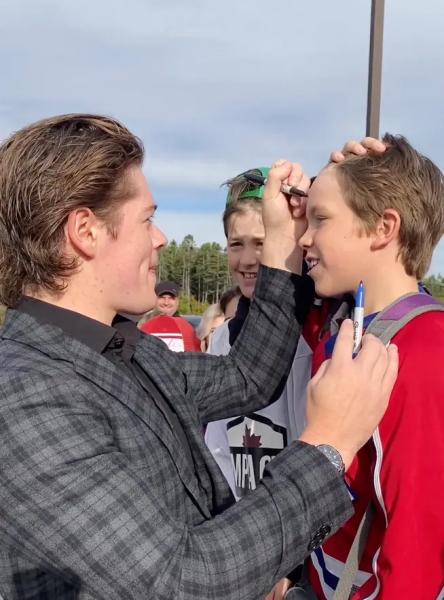 GANDER, Newfoundland | Brendan Gallagher, Cole Caufield and Youppi! were the most in-demand Canadiens representatives when the team arrived at the Steele Community Centre.

“You get off the bus and you see all these young people, it takes you back to when you were that age. So you try to savor the moment and involve the kids as much as possible in the experience,” Gallagher recounted.

Some had weird ways of getting involved. For example, a young fan asked Caufield to sign an autograph…in the forehead.

“It was a first. I told him it was a Sharpie and it was permanent. He insisted anyway, so I did it,” laughed the Canadian striker.

The Queen, Chuchill and the Beatles

The Canadiens and Senators players aren't the first celebrities to set foot in Gander. Even compared to those that preceded them, they are far from holding the top spot.

Queen Elizabeth II and Prince Philip, Winston Churchill, Fidel Castro, the Beatles, Albert Einstein, Frank Sinatra: all have already set foot in this small town in the Maritimes. At the very least, they walked into its airport.

It must be said that at the time of its construction (in 1938) and until the end of the 1960s, the international airport of Gander served as a refueling point for transatlantic flights. Passengers were therefore going to untie their legs while the gas station attendants at the airport filled up.

A facelift for The George

With the $250,000 prize that she won, Twillingate, winner of the 2020 Kraft hockeyville competition, will be able to renovate her dilapidated arena.

Built in 1968, the George Hawkins Arena was built with parts from one of the hangars at Gander International Airport.

Today, the roof of the facility is leaking, the compressors are tearing and the life expectancy of the zamboni draws to a close.

For the record, George Hawkins is a Canadian soldier of the First World War, who died on July 1, 1916 at the Battle of the Somme. That day, 57,000 soldiers of the British Empire perished.

Alone in the world

Do you remember the Radio-Canada advertisements that ended with “an hour later in the Maritimes”? Well, she wasn't completely truthful.

Oddly, Newfoundland (and the southeastern portion of Labrador), has its own time zone. One and a half hours ahead of Eastern Time.

No other region in the world is in the same time zone. Still special as a way of being unique.