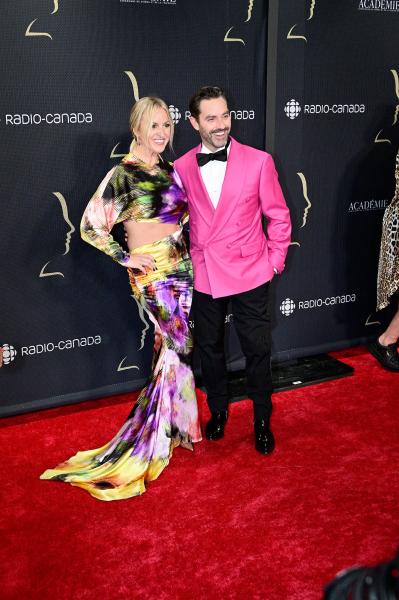 To celebrate the 37th Gémeaux Awards Gala, the stars of the small screen pulled out all the stops on the Place des Arts red carpet. The glamor was everywhere, and the best part was that it ranged from its traditional version to its more contemporary iterations. Some opted for long dresses with a train, others for brightly colored sheaths, there were also a few tight dresses with strategic cuts and a few tulle creations. The costume was worn with a shirt and bow tie, but also sometimes directly on the skin, open over a lace bra or revealing a camisole. Several local designers and brands shone at the event!

“I wanted a low-cut look. I called on Anomal Couture to design my outfit,” launched Julie Ringuette, accompanied by Pascal Morrissette, who wore a Zara suit.

Mélissa Désormeaux-Poulain was radiant in an apple green dress by designer Laruelle.

Stéphane Rousseau played the Hugo Boss tuxedo in a very contemporary way by slipping it on a white camisole which protruded slightly.

Ludivine Reding fell for a cut-out dress from the brand time, Nensi Dojaka, while remaining loyal to her favorite shoe brand, Christian Louboutin.

Emily Bégin and Guillaume Lemay-Thivierge were perfectly coordinated. She had donned an Anomal Couture dress illuminated with Ecksand jewels and he a Surmesur suit.

Evelyne Brochu fell for a dress with tulle flounces from The Bar brand.

Milya Corbeil chose a white dress decorated with crystals reminiscent of those of his L'Interval sandals.