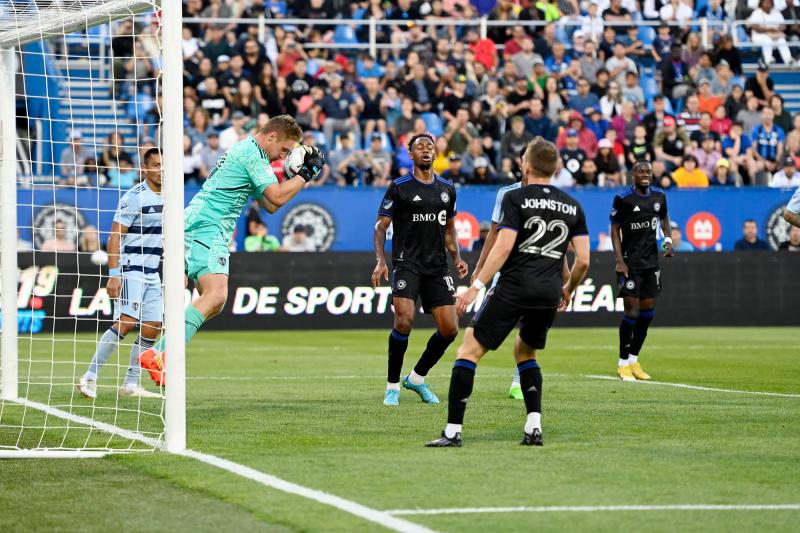 CF Montreal's 2-1 loss to Sporting Kansas City on Saturday will not be easy for Wilfried Nancy's men to forget.

< p>And yet, CF Montreal played a superb first half, one of its best. The players attacked well and were able to cross the lines of Sporting's defensive block well. The Montreal squad made some nice throwbacks that unbalanced the opposing defense.

But the club was unable to take advantage of his strong performance. The score should have been 2 to 0 for CF Montreal after the first 45 minutes. But even if the Montreal defense was still very comfortable, it was tied 1 1 after the first half.

Historically, Sporting have always been a dangerous club in MLS. This season is very different. It is very far from its usual level. Even though they won, Sporting demonstrated the reasons why they are at the bottom of the MLS table. He really didn't play well and wasn't dangerous at all offensively, apart from Roger Espinoza, who is one of the best players in the league.

And it's for these reasons that the defeat of CF Montreal is difficult to digest.

A spectacular first half

The two goals that came in the first half of this game were spectacular. The CF Montreal goal was the result of superb collective action. Several players were involved in this achievement. Ismaël Koné turned the ball well in midfield and made a precise throw-in to Lassi Lappalainen. The Finn set and beat his defender and sent in a quality cross to Romell Quioto, who found the back of the net.

Personally, I really liked Koné in this match. He played well, yes, but he always wanted to be involved in the game, at all times during the game. He always wanted to help the team. As for Lappalainen, he probably played his best half in quite a while. He participated well in the attacking game, along with Quioto, producing several very dangerous crosses.

Equally spectacular, however, Kansas City's goal was the result of a superb individual technical gesture. Espinoza, under pressure, was able to see that Sebastian Breza had slipped out of his net a bit and made a nice move with his left foot. His goal tied the game in the first half. And I think he is a good example for young players who want to learn how to have a good vision of the game.

Thus they were two completely different goals, but spectacular in their own way. A collective action and a superb technical gesture.

A lot of mistakes

But CF Montreal made a lot of mistakes in this Sporting victory, including on the first goal. If -Romell Quioto looked bad on the initial goal, it was a collective error that cost the second goal, and that is worse. Both Kamal Miller and Rudy Camacho were out of position; Miller misjudged the ball and Camacho failed to cover his teammate's potential error. The players in midfield also lacked anticipation on this game. This shows, once again, the weakness of the defensive game of the Montreal formation, and this, even against a rival who did not pose so many problems as that.

Yes, CF Montreal was still deprived of the services of Djordje Mihailovic and Victor Wanyama. Even though Kansas City won, Sporting didn't play well. However, he took advantage of CF MTL's individual and collective errors.

I imagine that the players and the technical staff must not have been at all happy with this result. But it will have to be forgotten quickly.