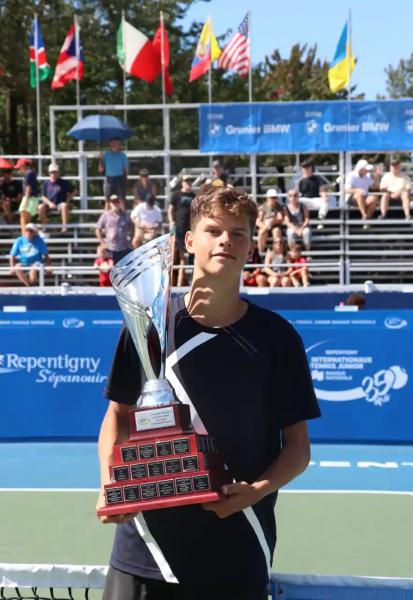 The 35th edition of the Internationaux de tennis junior in Repentigny came to an end on Saturday, at Larochelle Park, with the coronations of Alexander Blockx and 'Ella Seidel.

The Belgian, seeded sixth, was crowned by defeating in the final the Romanian Mihai Alexandru Coman (7th) in two sets of 7-6 (1) and 6 -2.

The finalists knew each other very well before the final match, since they teamed up the day before to take the doubles title.

In the duel of the day, however, Blockx did not make a gift to its doubles partner . He quickly took a 3-0 lead in the first set and shrugged off Coman's comeback by winning the tiebreaker.

Then, on the second run, the 17-year-old imposed his rhythm and was expeditious to savor the victory.

As for the girls, the faller of the Canadian Mia Kupres, Ella Seidel, stole the top honours. The German (8th) defeated Japan's Sara Saito (5th) in straight sets 6-4, 6-2.

Seidel remained in control of the match, even after seeing her opponent experience a boost of energy in the middle of the first set.

The 17-year-old player, who occupied the 50th world junior rank of the International Tennis Federation, should thus climb a few rungs after this fruitful stay in the Lanaudière region.

The National Bank Open Junior Tennis Championships will be back from August 25 to September 2, 2023.