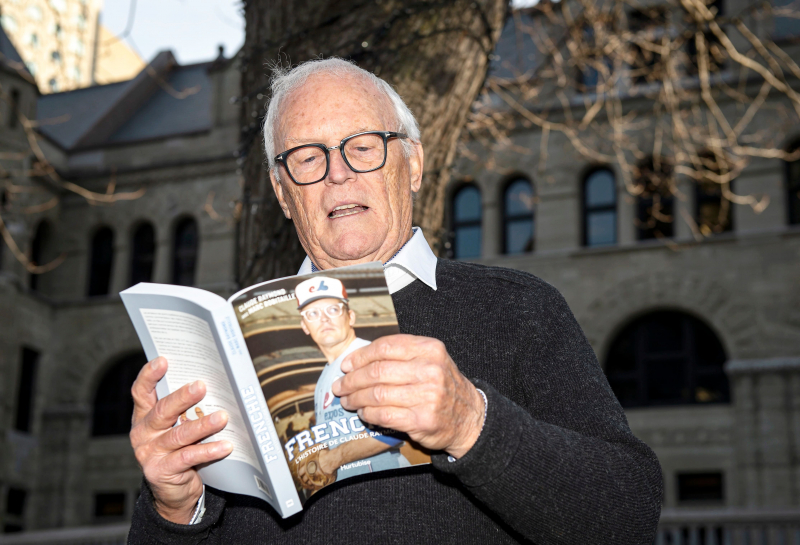 The meeting was given at Windsor Station, where, on March 12, 1955, Claude Raymond's great adventure towards major league baseball was to begin.

That evening, more than 67 years ago, the Quebecer was waiting for the train in downtown Montreal to go to Georgia, in the United States, to attend the Milwaukee Braves rookie camp. The athlete from Saint-Jean-sur-Richelieu had not yet reached majority.

“It touches me to do the interview here,” testified the former pitcher, whose story biography titled Frenchie is out this week.

“We were in a hurry to go, but the train was not leaving because we were expecting the players of the Canadian, immediately says Claude Raymond, who plunges back with joy into his memories of 1955. There had been mayhem at the Forum this evening -there… It was finally Maurice Richard who boarded the train first to shake hands with us and wish us good luck. »

While the young Claude, accompanied by a few other Quebec players, was going to the camp of the Braves, the history of Quebec will remember that the famous number 9 of the Habs was going to play the next day against the Bruins, in Boston. This is where the Rocket had a run-in with Hal Laycoe, then knocked out a linesman. Richard was suspended and it was the famous Forum riot.

If the book Frenchie first tells the story of Claude Raymond, it revisits at the same time many events across eight decades. This book is a duty of memory delivered in collaboration with the author Marc Robitaille. Raymond's journey alone is fascinating and deserves to be documented.

“That's how Marc convinced me to do it, he told me that I had to leave a legacy to my children, to my grandchildren, but also to all
Quebecers”, specifies the baseball man.

Still straight as an oak tree at 85, Raymond reveals a touch of emotion when it comes to his family. This is the case when talking about his late father Rolland.

Also in 1955, before putting his name at the bottom of the contract offered by the Braves organization, he had also received another offer from the Pittsburgh Pirates. This could allow him to play in known territory with their school club, in the Provincial League, in Saint-Jean-sur-Richelieu.

Indeed, it was shortly after this declaration of the father that Raymond found himself at Windsor station to go to Waycross. During this famous rookie camp, the 17-year-old received the nickname Frenchie.

“Since I didn't speak much English and we had hard to pronounce Claude Raymond in Georgia, they nicknamed me Frenchie, he says. It was practical. Other players and coaches remembered me from season to season. It was easy to remember that I was Frenchie. »

At 85, Claude Raymond still has his child's heart. This is how he likes to say that he has already worn the colors of the Toronto Maple Leafs.

“Still today, I say that sometimes that I have already played for the Maple Leafs, he says, laughing heartily. And I have fun with it, I don't always say it was baseball…”

In fact, Raymond played briefly in the International Baseball League, in 1962, with a team called the Toronto Maple Leafs, like the famous hockey club.

It's elsewhere with that organization he last played in the minors, then getting a real shot at major league baseball with the Milwaukee Braves.

During his stay in Toronto, he had made friends with a few hockey players, including Tim Horton, the same man who launched the popular donut and coffee chain.

“One day, before facing the Canadiens, Tim told me: 'We're going to beat the Frenchmen“, says Raymond. The Leafs' plan was to put five defenders on the ice to start the game and shake up the CH players. After five minutes, I think Montreal was leading 3-0. I called him back the following week to ask him, knowing full well what had happened, how the game had been. »

Giving back to young people

Beyond the Maple Leafs, Raymond mainly played 12 seasons in major league baseball, having notably been invited to the All-Star Game in 1966.

He wore the colors of the Chicago White Sox, Braves [in Milwaukee and Atlanta], the Houston Astros and finally, from 1969 to 1971, those of the Expos.

He participated in a total of 449 games in major league baseball before becoming sports commentator, then coach.

“It's incredible to think about all that when I imagine the little guy on boulevard Gouin in Saint-Edmond,” said the former pitcher, smiling.

While scrolling through his many anecdotes from the past, the man wants to talk about the present and the future. From the Claude-Raymond Fund, which awards numerous scholarships to young people in the Saint-Jean-sur-Richelieu region, and the annual Classic bearing its name, where the best baseball players aged 14 and under in Quebec converge each summer .

“If a young person can be inspired by reading my story, I will have achieved the goal,” he concludes.