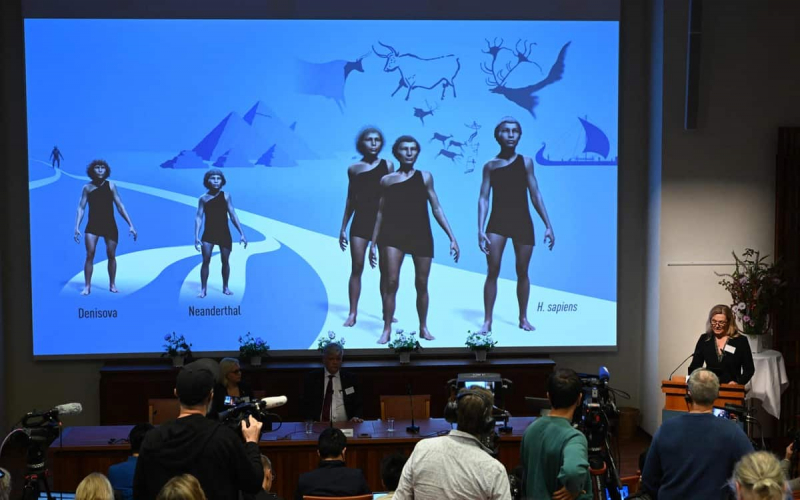 More than 50,000 years ago, in a cave in Siberia, there lived a community of Neanderthals of the same family, where women migrated more than men: a genetic study published on Wednesday sketches the outlines of a “social organization” among our distant cousins.

The 2010 sequencing of the genome of Neanderthal man by the Swede Svante Pääbo, recent winner of the Nobel Prize in medicine, has made it possible to retrace in broad strokes the history of this extinct lineage which populated western Eurasia between 430,000 and 40,000 years ago.

Thanks to archaeological excavations, we know that some Neanderthals buried their dead, made elaborate tools and even ornaments, far from the image of primitive brutes that stuck with them for a long time.

But little is known about their social structure. The genetic sequencing of an entire group of individuals, the largest ever carried out on these hominins, lifts a corner of the veil.

The story takes place in southern Siberia, Russia, a particularly fruitful region for the search for ancient DNA, the cold helping to preserve this fragile and precious clue to the distant past. It is in particular there that the genome of Denisova's man, another extinct human line, was brought to light, in the cave of the same name, recalls a press release from the Max Planck Institute for Evolutionary Anthropology in Leipzig (Germany). , where the work published in Nature was carried out.

A father and his daughter

About a hundred kilometers away are the caves of Chagyrskaya and Okladnikov, occupied by Neanderthals around 54,000 years ago. Multiple remains had already been recovered there, on a single layer of deposits, suggesting that the occupants lived there at around the same time.

To verify this, it was necessary to make the DNA, a task all the more delicate as it was not about whole skeletons, but about teeth and scattered bone fragments.

“We first had to identify how many individuals we had,” paleogeneticist Stéphane Peyrégne, one of the main authors of the study, told AFP. His team used new techniques to isolate ancient human DNA – often drowned in microbial contamination – and capture it.

Verdict: The remains came from 13 Neanderthals (7 males and 6 females , including 5 children and young adolescents), including 11 in the Chagyrskaya cave.

In their mitochondrial DNA – transmitted by the mother – the researchers found the same genetic variant, heteroplasmy, which only persists for a few generations.

The genes also revealed close kinship ties: a father and his teenage daughter, a young boy and an adult woman who would have been his cousin, aunt or grandmother. Direct evidence that these individuals belonged to the same family and lived at the same time.

Thanks to genetics, “we produce a concrete image of what a community of Neanderthals might have looked like. They seem much more human to me,” comments Benjamin Peter, who supervised the research alongside Svante Pääbo.

The group in question, genetically close to the Neanderthals of western Europe, is not is not mixed with other species – Sapiens and Denisova – as other Neanderthals did in other times.

Its genetic diversity is also very low, a sign of significant inbreeding and of living in a small group of 10 to 20 individuals, much less than in the ancient communities of Homo sapiens.

“ We are probably dealing with a very subdivided population” who did not live in complete isolation, describes Stéphane Peyrégne. Because the women would have tended to migrate from community to community to procreate, the men remaining in their clan of origin. This “patrilocal” functioning, which also prevailed in Sapiens, is suggested by a genetic diversity of the Y chromosomes (transmitted by the male line) much lower than that of the mitochondrial DNA, transmitted only by the mother.

Such an organization had already been put forward after the discovery of fossils from the cave of El Sidron in Spain, but on the basis of less complete genetic material, notes the paleoanthropologist Antoine Balzeau who did not take part under study.

“It is a very interesting technical feat for our research, even if we will have to compare with other groups”, reacted this researcher at the National Museum of natural history.