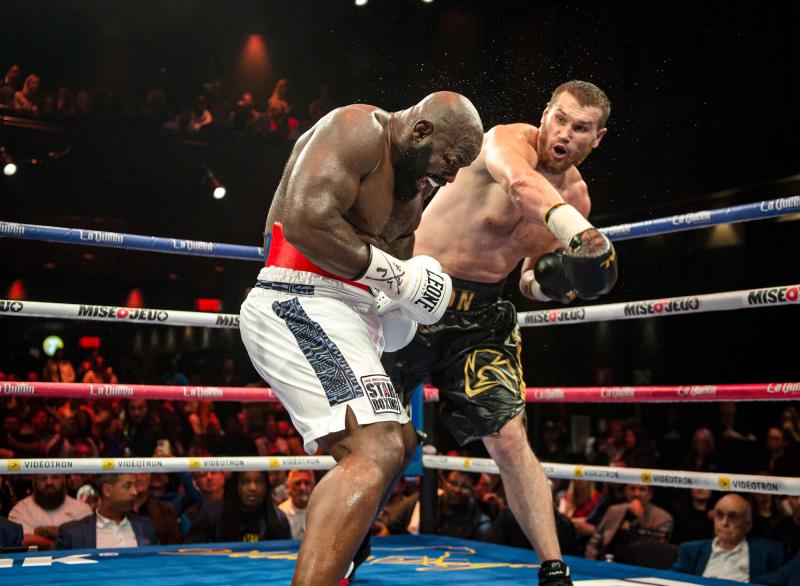 The fight between Arslanbek Makhmudov and Carlos Takam had just ended a few minutes ago. Marc Ramsay was still in the ring after getting the judges' decision win.

I caught his eye. I wanted to get his immediate reaction. Instinctive. Before he had time to analyze everything as he does so well.

Leaning over the cables, he answered the first question:

– “It was a fight for men. It was the fight we were hoping for. We got there with Makhmudov. From tonight, he will face opponents of this caliber. That's how it is in the top flight.

– “But it seemed to me that he didn't see the openings all the time. Sometimes, Artur Beterbiev would have dived…

– “There is only one Artur Beterbiev. Arslanbek is something else. It is certain that he lost his boxing structure when he was under pressure. But that's normal, we're going to work on everything we've learned tonight… »

Yesterday, in the Eye of the Tiger Management clan, we were satisfied with the evening. Not to mention Steven Butler who showed that he could progress despite his ten years in the pro ring, we lingered on the centerpiece of the company. Arslanbek Makhmudov.

We now know that he has a jaw of steel. He took a few rights swung at all costs by Carlos Takam without flinching. As if it were a fly that was chowing down on him. This is very important for the future.

He showed that he still had a lot to learn. It's perfect. A few slightly elated fans were shouting on social media after the fight. It was over Makhmudov.

Do you think for a second that Marc Ramsay and Camille Estephan believed that Makhmudov would plant Tyson Fury in two rounds? And Deontay Wilder in three? Not to mention Oleksandr Usyk in four and Andy Ruiz and Joseph Parker in four rounds… on the same night?

It's simple. Friday at the Casino, Arslanbek Makhmudov entered the circle of strong men. The real ones.

JEFF JEFFREY GOT IT

But why didn't he use his double jab? And why, seeing that Carlos Takam was systematically leaning under the attacks to offer only his top of the head to the blows of Makhmudov, did he not take a step back?

Because he had never had to learn it. He had never needed it. The big Russian climbed into the ring stepping over it and knocked out all his opponents in a few minutes. No need to be tricky, no need to be defensive, no need to be structured for ten rounds.

I had a long chat with Jeff Jeffrey, the analyst at 91.9 who was sweating after the fight so much he had plunged into the action. Jeff is passionate and sometimes forgets how humans tend to operate.

– “Because it is not natural for him?

– “However, it is important.

“Because he never needed it. He would get in the ring and tear everyone down. Tonight, he learned he would need more tools to go up against the rest of the greats. The need creates the organ, anyone who has studied the theory of evolution knows that. Makhmudov needs more tools, now he will listen to Marc Ramsay, now he will work to acquire them. It is the same in all fields. Man always aims for the easy way out of a situation. It's the same in boxing…”

< p>Makhmudov was very interesting in the press briefing. He analyzed the fight and the performance of his opponent very well. He acknowledged that he also learned about himself. By specifying that he wanted to take his time and make sure he could adapt to the situation.

But he was surprised by the physical condition of his opponent who never lowered the tempo.

Besides, watching Takam's fights earlier in the week, I realized that he had really annoyed Anthony Joshua for four or five rounds before breaking the diet. Must say that he had accepted this title fight with ten days notice. In his other fights against the division greats, he was tough to beat. Especially in the first six rounds.

He was the perfect heavyweight to open the door to the elite for Makhmudov.

Phone call to Jean Pascal. Smiles and good humor on the other end of the line…digital.

Jean Pascal and Greg Leon, his manager, and promoter Lou DiBella won the bid to present the fight. He will face Joshua Buatsi.

Jean Pascal, always so alert, did not fool around with the puck. He slipped me into the conversation that if it didn't work out, he was going to face Joe Smith Jr. in New York. Not complicated. Simple as anything.

The Good God is good for the humble proletarian of information. Who was ringside Friday at the casino? Joe De Guardia, promoter of Carlos Takam… and Joe Smith: “Yes, I confirm that we are waiting for Jean Pascal. If it doesn't work out for Buatsi, we'd like to set up a matchup between Jean Pascal and Joe Smith Jr. somewhere in the New York area. Joe lost to Artur Beterbiev, but admittedly Beterbiev is in a special class. In addition, everything went wrong for Joe in the weeks leading up to the fight. That's not an excuse, but it's the truth,” DeGuardia said.