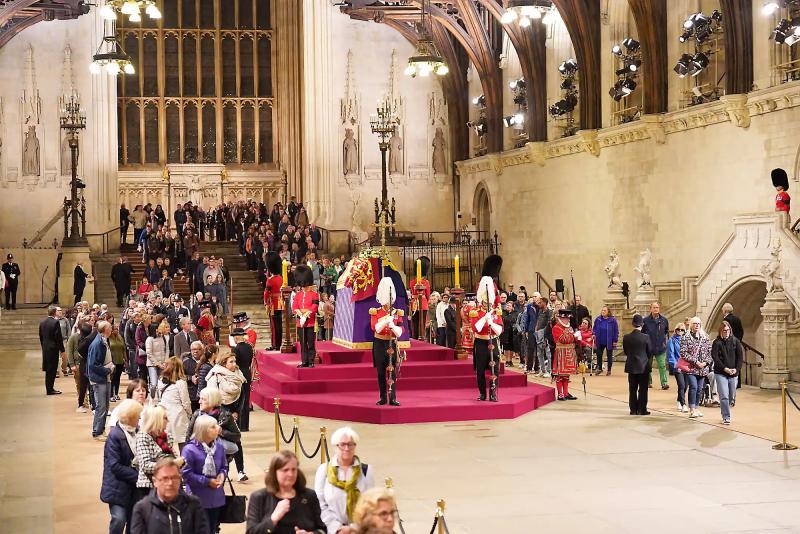 LONDON | They still have one day left. And another night. On Monday morning, the endless wait along the Thames will be over for just a few seconds of meditation near the coffin of Queen Elizabeth II.

For the most part, they come out of Westminster Hall… satisfied. I'm looking for a better word: moved, certainly; shaken, up to a point; relieved, that's for sure. Relieved not to have missed the opportunity to be part of history.

I still think that's the primary motivation. History in different forms: a long moment of personal history – up to 70 years old for the oldest, but for the vast majority, it is essentially their whole life – with Elizabeth II still there, somewhere. As a Scottish woman who came to bow before the royal coffin then exposed in Edinburgh said: “I always thought that the queen would live forever”.

The story also that is quoted forever, like “Where were you when you learned that…?” ”.

Two women mourn in front of the coffin of Elizabeth II.

A woman who was five hours into the wait and had no intention of giving up told me that her father attended Elizabeth's coronation in June 1953.

A big blow of nostalgia

I also realize that the most saddened are, with that of the sovereign, mourning an era gone. Confused and approximate, many Londoners I have interviewed end up pointing out that “times are changing”, that there is “more uncertainty than before”, that “we no longer know what awaits us”.

And they cling to their anxiety an image of the queen, faithful to her duty, invested in service to the nation, constant and unchanging.
In other words, we are no longer sure of anything with inflation, the rising cost of energy and housing, the war in Ukraine which drags on, and now the queen fades away in turn!

I heard a Mexican on the BBC recall how, when she was younger, she followed, amazed, the appearances of the queen: “Queens exist for real! “. The queens exist for real!, she was ecstatic. Never mind that this queen, like the others, had nothing better to do than to cut the cords inaugurating a new hospital or the refreshed premises of the “girl scouts”.

In other words, the monarchy, it passes the time. And the Windsors, throughout the 20th century and for twenty years, have given plenty to gossip about: from Edward who, so much in love with an American divorcee, gives up the throne to Diana, “the people's princess”, that the future Charles III “had him killed”… because I was served it several times, that one.

These days, there is Andrew, the pervert, and Meghan, the witch who bewitched poor Harry. The British royal family is the Kardashians with ceremonial outfits, crowns and real castles. Also pointless, but also captivating.