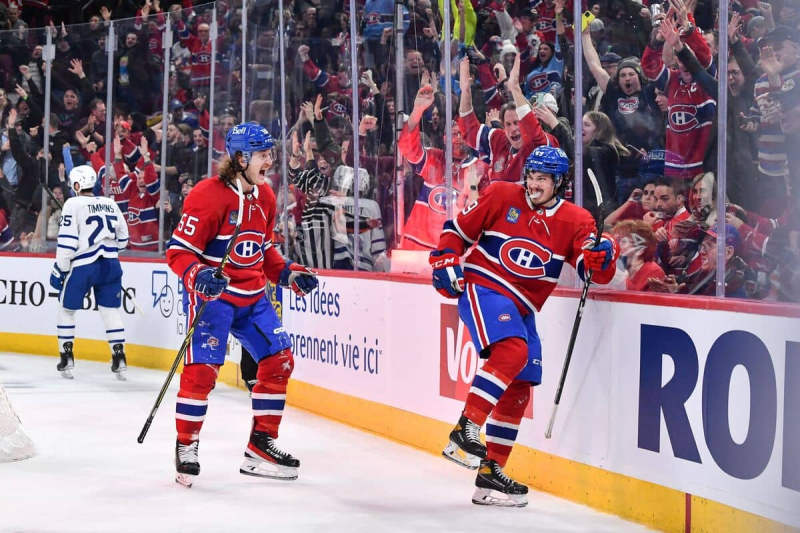 Rafaël Harvey-Pinard scored his first NHL goal in his first game with the Canadiens. It was Dec. 28 in a 5-4 overtime loss to the Lightning in Tampa.

Nearly thirteen months later, Harvey-Pinard experienced the joy of a first goal on Bell Center ice. In the second period, the winger jumped on a return from Michael Pezzetta to lodge the puck in the top of the net against Ilya Samsonov.

He jumped into the bay window after his goal to then receive a big hug from Pezzetta and Alex Belzile, the author of the other pass on this game.

“It's hard to describe as emotions, said Harvey-Pinard after the match . I had shivers that ran all over my body. It's a little guy's dream to score a goal at the Bell Center, even more so against the Maple Leafs on a Saturday night.”

For the first time, number 49 also had the pleasure of listening to the honeyed voice of Michel Lacroix for the announcement of his goal.

“It was special. Ever since I was little, I've heard him say the names of the guys that matter. I have chills all the time. But hearing my name was even more magical. It was a special night.”

In Montreal for Tuesday's games against the Jets and Thursday against the Panthers, Marc Pinard and Johanne Harvey headed back to Arvida in Saguenay on Friday morning.

“My parents weren't not there tonight but i had family on my girlfriend's side, pointed out number 49. i know my parents were watching me at home. They are proud of me. It's heart-warming.”

In the CH locker room, Harvey-Pinard also unveiled a unique talent for Belzile, namely that of reading the future.

“Before extra time started, Alex had told me on the bench that he believed Pitlick was in for the game-winning goal. When he scored, I couldn't believe it. I will ask him more often for his predictions.

Rem Pitlick, another forward who has worn the Laval Rocket uniform this season, laughed at his teammate's prediction.

“Belzile is awesome. I was happy to see him again before the game. I had built a great bond with him in Laval. I'm happy to know that he believes in me and that he made this prediction.”

Belzile, meanwhile, was a little shy to come back to this story. He was probably afraid of inheriting the nickname of JoJo Savard.

“I don’t know where it comes from. I don't want to pass myself off as a genius. I had this feeling. When extra time started, I had a feeling. When Pitlick regains his confidence, he's quite the hockey player. I am very happy for him. I had already made a prediction of the kind this season in Laval.”