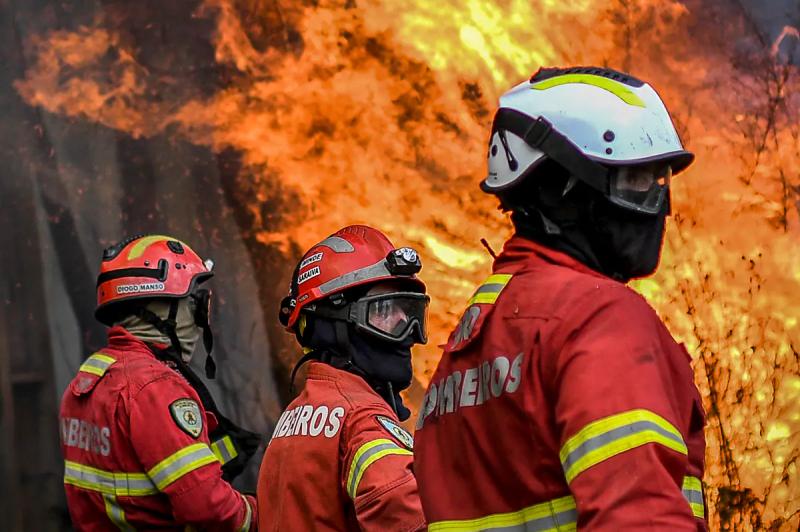 MANTEIGAS | More than a thousand firefighters are mobilized on Wednesday to try to control a forest fire that has been ravaging the Serra da Estrela natural park for several days, a mountainous region in central Portugal classified by UNESCO.&nbsp ;

The fire broke out on Saturday in the municipality of Covilha and has already destroyed at least 3,000 hectares of forest and brush, causing four minor injuries among firefighters, according to initial estimates cited by local authorities.

After coming close to being contained earlier this week, the flames erupted on Tuesday afternoon, threatening the town of Verdelhos.

On Wednesday, the village of Sameiro, located in the municipality of Manteigas, was the epicenter of the fire.

If one of the slopes of the valley was already tinged with black and gray by the passage of the fire the day before, the hill opposite was plagued by several hearths from which rose here and there flames and thick columns of smoke.

Beware of the winds violent and inconstant, the firefighters were placed on the edge of the village to protect the houses.

“It's a heartbreaking disaster,” lamented resident Antonio Duarte to AFP.

“Everything was green, and now everything is black… I have no never thought that a fire could take on these dimensions”, continues this 62-year-old retired policeman.

“We are shocked, it's the fire of shame,” says Margarida Cruto, another resident, a 66-year-old former textile worker, judging like other residents that the firefighters did not put the means necessary to prevent the fire from spreading as far from its starting point.

The Serra da Estrela Natural Park extends over the highest mountain in mainland Portugal, which rises to some 2,000 meters above sea level.

This site was classified as a World Geopark by UNESCO in 2020 due to its exceptional geological heritage.

The biodiversity of the Serra da Estrela natural park is “the first victim” of these fires, regretted the association for the defense of the environment Quercus, considering that these fires are in particular the result of an “abandonment of forests”.

Portugal, which is experiencing an exceptional drought this year, also experienced the hottest month of July in nearly a year. century, according to the National Meteorological Institute.

Since the beginning of the year, more than 70,000 hectares have gone up in smoke, according to the latest, still provisional, estimates from the Institute for the Conservation of Nature and Forests (ICNF).