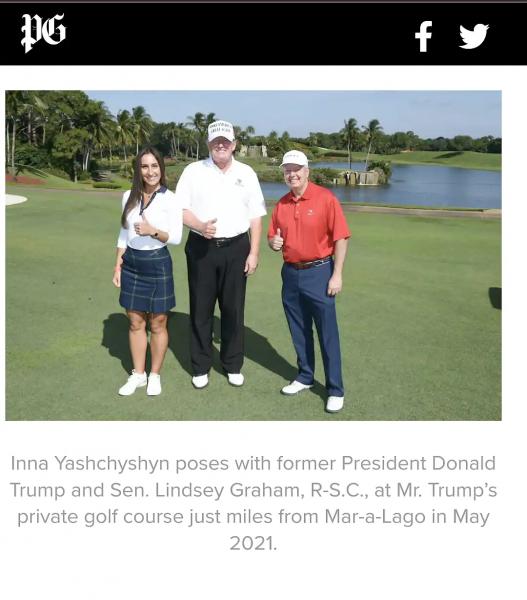 THE NEWSPAPER | A Ukrainian woman who managed to infiltrate the entourage of former US President Donald Trump by posing as a wealthy heiress would also be the subject of an investigation in Quebec in connection with a fraudulent charity, two American media reported yesterday.

The unusual story is that of Inna Yaschyshyn, a 33-year-old Ukrainian who allegedly cheated the security of Donald Trump's lavish residence by posing as an heir to the wealthy Rothschild family. She reportedly even managed to get her picture taken alongside the former president, whom she met on his private golf course in May 2021.

“She wasn’t just using the name. She would talk about the family vineyards and estates, and her youth in Monaco,” told the Pittsburgh Post-GazetteJohn LeFevre, a former investment banker who met her at a club pool. This newspaper investigated the story in conjunction with the Organized Crime and Corruption Reporting Project (OCCRP).

A fake Canadian passport in the name of Anna de Rothschild.

False identity cards, Rolex watch on the wrist, Mercedes-Benz SUV worth $170,000: it is under the created identity of “Anna de Rothschild” that the guests at the luxurious residence of Trump in Florida, Mar-a-Lago, knew the 30-year-old.

This woman had managed to obtain an initial invitation from a founder of a financial services company in New York – and a supporter of Trump – to go to the residence of the former president.

The next day, she met him at an event at his private golf course, a few kilometers from his residence.

In a video shared by the Pittsburgh Post-Gazette, a man is heard asking her for a million dollars for her picture with Trump.

“Anna, you are a Rothschild. You can afford to pay a million dollars for the picture of you and Trump,” a man can be heard throwing at the golfer in a video shared by the Pittsburgh Post-Gazette. < /p>

The false heiress would have gone to the home several times. It was only in March 2022 that the entourage of the ex-president would have been informed of the ruse.

Just weeks after searches of the former president's home revealed that at least 184 classified documents – including 25 top-secret – were in an unsecured room, these New information raises serious concerns about the ease of entering Mar-a-Lago.

“It is his residence. She shouldn't have been there,” he added.

According to a former business partner of Inna Yaschyshyn, Valeriy Tarasenko, she created the ruse to form bonds with politicians and business people, he reportedly said in an affidavit to the court for another trial, where he described her as a fraudster and a predator.

The latter, who in turn filed an injunction against him for domestic violence, defended herself by swearing to the court that she had never taken a name that was not hers.

Under investigation with us

President of the United Hearts of Mercy charity in Montreal and suspected of being a front to hide illicit funds, Inna Yaschyshyn is under investigation by the FBI and a police force in Quebec, reported the American media.

Le Journal could not confirm yesterday that an investigation was open on this side below the border in connection with these allegations.

As of yesterday, there was still at least one business registered in his name in Montreal.