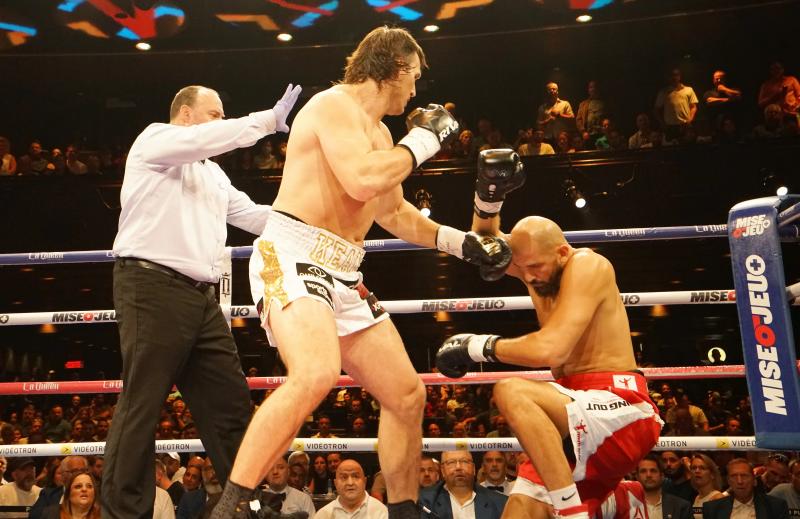 I said to the two young people going up to Sainte-Adèle while we were stopped on the 15 at midnight on a highway blocked by “urgent ” work : ” I would live to be 100 and I wouldn't see what we just saw at the Casino “.

Newfel Ouatah, Algerian and French boxer, heard the gong signaling the start of the fight against a scary-looking Simon Kean.

Ouatah took a step, stopped, raised right fist and landed one knee on the ring mat. Simon Kean who had five months of intense training to get out of the system gave a light left jab, not understanding at all what was going on.

We finally understood later in the evening and the next day by reading the French media like L'Équipe and boxing magazines. Ouatah had received a letter around 4 o'clock (that's ten o'clock in the evening in France… that one, I don't understand it. Unless it was 4 o'clock in the morning.) which warned him that he was forbidden from boxing in Montreal and that he would not be covered in case of “concerns”.

But then, how is it that the Régie let him get into the ring?

10 MINUTES BEFORE… EVERYTHING WAS NORMAL

When matchmaker Stéphane Loyer, one of the best in the business, contacted Newfel Ouatah to offer him the fight against Simon Kean, he followed the usual procedure. Agree on a sum of money and then have all the necessary documents sent. Including a request sent to the French Boxing Federation for 2022.

The Régie des alcools, des courses et des jeux has reviewed the documents and everything has been deemed to be in order.

It was around 4 p.m. on Friday afternoon that the French Federation reportedly warned Ouatah that he was not compliant and therefore not insured.

Instead of warning Camille Estephan who could have moving a preliminary fight to half past nine for TVA and international television which tuned in for the last three fights, Ouatah played comedy.

A quarter of an hour before the fight, Estephan went the salute out of courtesy and thank him for accepting the fight. Ouatah remained calm and poised.

Stéphane Loyer came by a few minutes later. He thanked him for his collaboration in obtaining the documents and inquired whether the flights and hotel rooms had given satisfaction to the boxer and his two companions. Everything had been perfect and Ouatah never gave the slightest hint of what was coming.

Later, after his stunt that tarnished a magical evening and harmed the efforts of Eye of The Tiger Management and TVA Sports, Ouatah explained that he had made this gesture to make a demonstration of protest against the fate suffered by some boxers in France.

It is true that he did not receive his scholarship for the evening. But EOTTM still paid for three plane tickets and three hotel rooms and food for a week. Plus the purse of poor Simon Kean who was deprived of the climax of a fight after five months of training. Do the math and you'll find that it's a genuflection that cost at least $50,000. Probably more.

At least when John Carlos and Tommie Smith raised their black-gloved fists at the 1968 Mexico Olympics, they did so AFTER winning gold and silver . Not before the race!

As for Newfel Ouatah, he probably avoided a suspension by the French Boxing Federation for a few months. But which promoter on the planet is going to invest in this 37-year-old athlete?

The images of his incredible kneeling have been around the boxing world since Friday evening.

It's quite a calling card.

Virginie Assaly enjoyed much better coffee yesterday morning. Opening her emails, she came across that of Brad Jacobs, the COO of Top Rank, responsible for the agreement with ESPN +. About the Friday evening, Jacobs wrote that we were very satisfied with the production, the fights and even the unforeseen.

It should be noted that the American network, like its little Quebec brother Punching Grace, presented the entire card live from the Casino de Montréal. The first fights went to the limit and some were more than interesting.

At TVA Sports, we were less happy. Louis-Philippe Neveu knows his boxing and knows that with Mary Spencer and Christian Mbilli, a knockout can happen in less than five minutes.

But the big bossalso realizes that the network was entitled to three rounds of boxing in all with the genuflection of Newfel Ouatah.

Neveu is greatly satisfied with the production and the work of the commentators. And then – he's like the others – he fell in love with Mary Spencer and Christian Mbilli.

Neveu estimates that in the future, the Quebecor network could plan four fights for his evening . If another boxer decides to kneel, he will have a small cushion.

IN THE NOTEBOOK | It boosts morale to see the Casino full on a Friday night. The profits will pay the costs of all the electoral promises. We should now bring back the parking valet and offer some service in the parking lot. Then make sure the mats are clean and the staff are properly dressed.