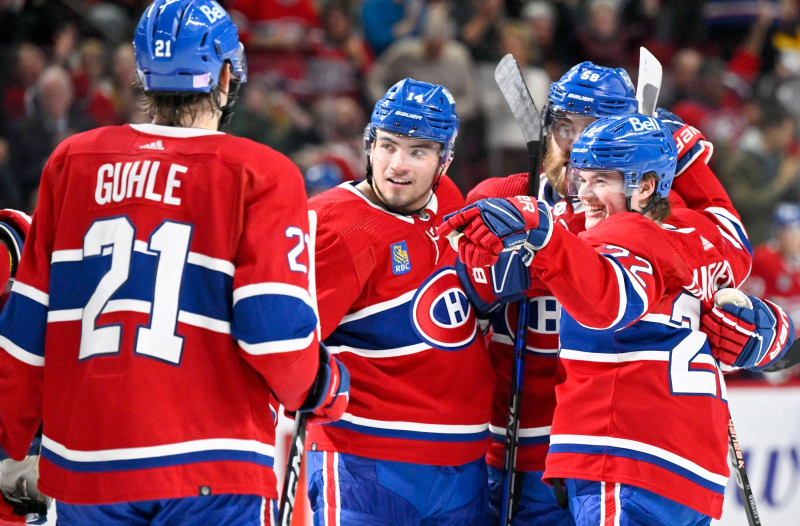 If anyone still doubted the chemistry between Nick Suzuki and Cole Caufield, the latter's equalizer at 19 min 57 s in the third period on Saturday night should reassure them .

What an incredible goal, and under pressure too! First Suzuki recovering Caufield's off-target shot along the boards and then the display of his exceptional vision and composure as he passed the puck to Caufield on the other side of the rink with about four seconds left. on the board.

Suzuki could have fired, as the majority of players would have done with such little time on the clock. Coach, Martin St-Louis, exemplified his captain's quick-wittedness very well when he said, “Nick doesn't play checkers. He plays chess”.

Let's move on to Caufield's execution now. The pass was sharp and to the back skate. A lot of players would have stopped the puck hoping to get a bigger shot, but Caufield has all the qualities of a great scorer, including being able to get a one-timer with a twist. He also shot with his right knee on the ice.

Flyers goaltender Carter Hart was beaten, not by the power of the shot, but by Suzuki's quick pass and Caufield's instant execution. Great art!

Believe me, it's the kind of goal that goes around the league, not just for its beauty, but for its importance and under the pressure of the clock. We knew through the NHL that Suzuki and Caufield were good, but now we know they can excel under pressure. It's the kind of moment that will ensure that two or three years from now, in a major playoff game, they will have the confidence to recreate that magic.

They know it, and now all the league knows it. I admit that they exceeded my expectations. We knew Caufield was a natural scorer and Suzuki was a great passer, but the captain can put her in too. His shootout goal was incredible. What hands! We even dream of two 50-goal scorers, but I would be happy with just one.

It reminds me of the complicity I saw between Alexander Ovechkin and Nicklas Backstrom in Washington. Ovie practiced his one-timer after practices and he asked Backstrom to give him perfect passes, but also passes in front of him, behind him, faster, etc. He thus developed his ability to shoot in all circumstances.

We can say what we want about the former general manager, Marc Bergevin, he was not perfect, but this Suzuki-Caufield duo is quite a gift he left to the supporters of the Canadian. I feel like in Las Vegas, we must regret letting Suzuki go in the Max Pacioretty trade.

It now remains for Bergevin's successor, Kent Hughes, to put Caufield under contract for several years. It's going to cost dollars, but the explosive little duo is going to sparkle for years. It promises, and I repeat myself, the whole league already knows it. In addition, the burly Kirby Dach supports them very well. His work along the strips is remarkable.

I imagine that a Canadiens fan who lives in New Zealand or Africa and sees the CH in sixth place in the Atlantic division, must be say it's another flat season in Montreal, but no. We are somewhere else and this is only the beginning.

There is still a lot of work to do and we can see it with the slowdown of goaltenders and young defenders, but it's part of the process and we know that the team is in good hands with Martin St-Louis.

A BOOK THAT MAKES THE TALK

The book by Pierre Gervaisis talked about as much as Nick Suzuki and Cole Caufield. Gervais is not the type to settle scores, but he tells things as he sees them in his work and he shares interesting details about Dominique Ducharme, among others. No one fell out of their chair when they learned that Ducharme didn't have the respect of his locker room. As for Marc Bergevin, the job of general manager made him a little too defensive, and I realized that personally. He didn't always like what I wrote and it showed in his attitude. His internal mood swings didn't help either. I wonder if he would act differently if everything had to start over or if he would admit his wrongs one day.

Before yesterday's game against the Edmonton Oilers, the Devils were on an incredible 12 game winning streak. It's starting to get serious and no one saw them coming. They don't have a killer roster, but they are well led by Lindy Ruff and we saw it during their visit to the Bell Center last week. The success of the Devils gives me hope that the Canadian can turn the corner in the not so distant future.

There's something for everyone in Montreal, and tough 21-year-old defender Arber Xhekaj isn't shy. It's good to have a strong young fullback who knows how to play hockey and who can also defend his teammates. He is making a name for himself in his own way and he does not hesitate to throw down the gloves, perhaps a little often, but he commands respect.