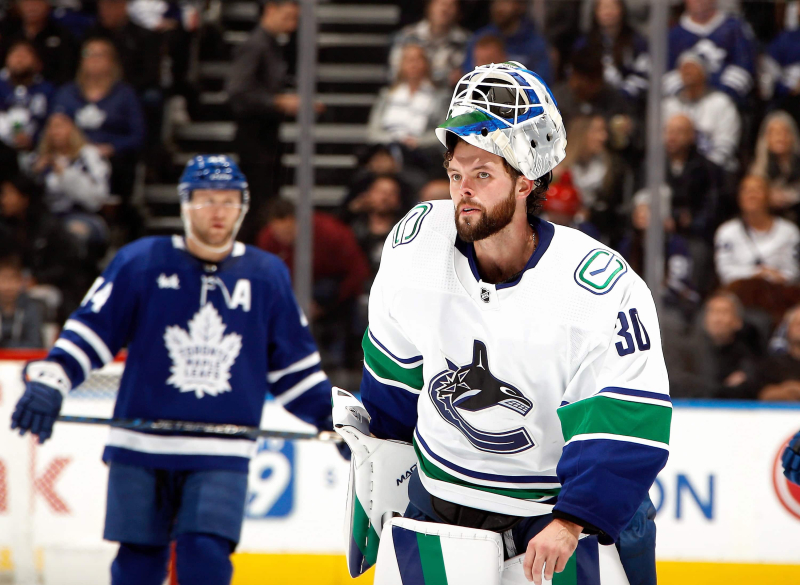 It's not just in Montreal that the goalie situation is part of the team's news. This is also the case with the Canucks where Spencer Martin has become the number one goaltender due to the injury of Thatcher Demko.

According to the latest developments, Martin will be the man of confidence of Bruce Boudreau for at least six weeks. The principal concerned won his first start on Saturday against the Arizona Coyotes.

However, he remains with both feet on the ground despite his new mandate.

“ Of course, the preparation is different when you find yourself in this role, mentioned Spencer Martin. You also need to have the confidence of the group of players.

“On the other hand, in the end, it’s the same sport when you jump on the ice. I won't play any different even if I have to fill big shoes.

Head coach Bruce Boudreau really likes what he sees from his goaltender.

“I always had faith in him,” he said. Every time I put him in front of the net he played well.

“He is a quiet person who is confident in his abilities. He shows up every day and he's always focused. Every time a player gets injured, it's an opportunity for someone else. Last year, he did it well for us.

During Demko's absence, Martin could see a lot of action. Boudreau recalled the case of Jonas Hiller, who had used 32 games in a row when another goaltender was injured.

“We didn’t have to travel a lot during that period. We will do everything we can to win games. »

Martin's journey to the NHL is inspiring. Time and time again, he could have given up.

Colorado's third-round pick in 2013, the Oakville, Ont., native started his career in the American League and the ECHL in 2015.

The following season, he had his baptism in the NHL with the Avalanche. He hasn't had the chance to savor a victory in three starts. Thereafter, aside from a few reminders, he ate his black bread in the American League.

At some point , he was wondering about his career.

“Of course I had doubts. On the other hand, they helped me to progress. At times I thought I was ready for the next step, but I wasn't. This is the harsh reality.

“You need to be in better physical condition. You have to work on certain aspects of your game or adapt to changes in goalkeeper coaches. It allowed me to improve and be ready for this opportunity.

In 2019, he signed a contract with the Tampa Bay Lightning. Last year, he was traded to the Vancouver Canucks in return for future considerations.

Upon his arrival, he was the fifth guardian of his new organization. He had a big challenge ahead of him, but he was able to meet it.

At last training camp, he earned a spot as backup goaltender for Thatcher Demko. < /p>

“I am more motivated than ever because of my background. I've enjoyed everything I've come.

“It was not always easy to have hockey as my main livelihood. Today, I enjoy it more. I'm possibly the happiest player in the NHL.

“However, I don't just want to be happy to be here. I want to be able to make a difference. »