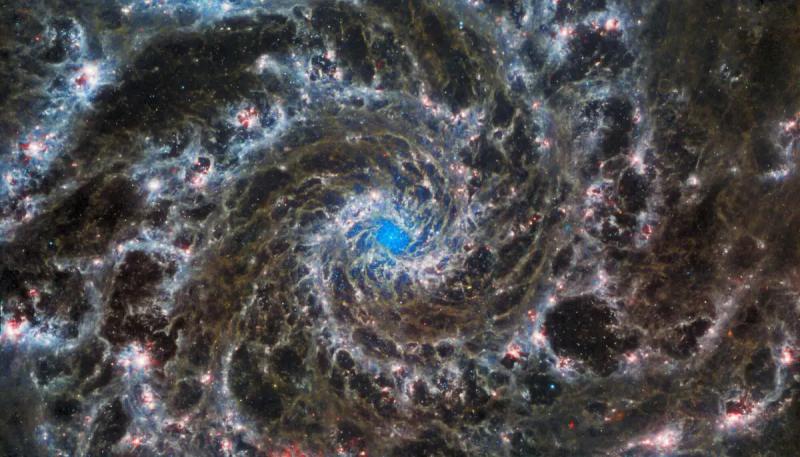 The James Webb Space Telescope has captured new details of a so-called Phantom galaxy in a spectacular image showing its spiral shape released by the European Space Agency (ESA) and NASA.< /strong>

Launched into space in late 2021 and operational since July, James Webb has since revealed impressive images of Jupiter, nebulae and other distant galaxies, providing scientists with a wealth of never-before-seen data to analyze.

The one published on Monday shows M74, or the Phantom Galaxy, its bright blue heart and its impeccable spiral, observed by the MIRI instrument, which studies the mid-infrared and is the result of a collaboration between Europeans and Americans.

“Webb's piercing gaze revealed fine filaments of gas and dust in the luminous spiral-shaped arms that unfold from the center of this image”, notes on its site the ESA, which specifies that the galaxy had already been observed by the legendary Hubble space telescope, launched in 1990 and still in operation.

The European agency, which co-developed the telescope with NASA, also notes that a “lack of gas” allows for a clearer view of stars from the center of the galaxy, located about 32 million light-years away in the constellation Pisces.

The data collected “will allow astronomers to identify the regions of the galaxy where stars are forming, accurately measure the mass and age of star clusters and better understand the nature of small grains of dust drifting in interstellar space”, notes the ESA.

An engineering jewel worth 10 billion dollars, the James Webb telescope conducts its observations at 1.5 million kilometers from Earth.

It has, for the first time, detected the presence of CO2 in the atmosphere of an exoplanet, that is to say a planet outside our system solar, researchers had announced the week p enough.