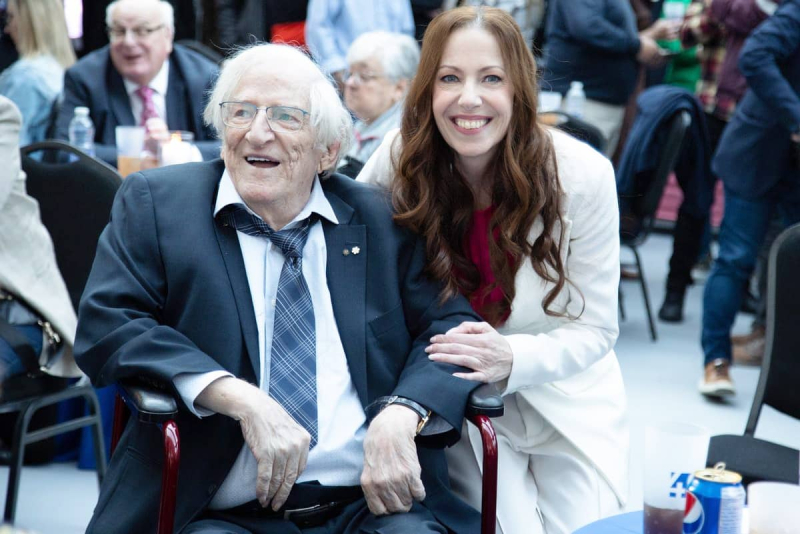 “Beautiful memories, we have plenty and we become very moved when we talk about them”, confided Anne Elizabeth and Jean-Marie Lapointe to the Journal hours after the announcement of the death of their famous father, Jean.

“For us, my father was someone so authentic”, confided the one who recently collaborated in the reissue of the biography Pleurires by helping his father to put order in his most recent memories.

The actor surrounded by his family at the 2019 Oliviers gala after receiving the “Thank you for everything” trophy.

Anne Elizabeth Lapointe admits that the family suspected that their father's outing, during the 40th anniversary celebrations of Maison Jean Lapointe, would be the last.

“Having sung at the age of 10 years Sing your song on stage with my father is one of the most beautiful memories, she told the Journal. I still remember that moment like it was Friday.

For host Jean-Marie Lapointe, some of the most precious memories were created when he returned to live with his father for a while during his separation.

“I ended up staying two years and during that time, we created some great projects: The paths of my life, an album and a show called Faces à farces, he recounted. Beyond the brilliance of a number, I retain the pleasure of having been able to experience this with my father. »

“He was an extremely simple man, he was humble in his way of being”, continues the one who did not fail to say “I love you” to his father each time he left him.

“He was an example that you could get through adversity. He found, I believe, a certain redemption in giving his name to the Maison Jean Lapointe. It was his greatest pride. He was a sensitive, kind, generous man, who was not afraid to show his vulnerability and who touched us all here in Quebec with his great talent. »

At the launch of the album Ces gens que j'aime by Jean Lapointe in 1992. The latter is accompanied by his daughters Maryse and Catherine, his wife at the time Cécile Labelle-Lapointe and his son Jean- Married.

A man of integrity

Artist agent Ginette Achim, who had worked with Jean Lapointe for more than 15 years, praised the integrity of the man who had become his friend.

“He was an exceptional person. He overcame, for example, a pain to restore to people the interest he had in them. He had that greatness. He was a friend, because friendship has no age. It's a big piece.

Comedian Benoît Brière, author of the preface to Jean Lapointe's biography, revealed to Journal last October that the duo was working on a joint film project.

“There will be something, I promise! he confided during the 40th anniversary of Maison Jean Lapointe.

The actor said he was honored and intimidated to have been chosen to write the preface to Mr. Lapointe's biography.

Weakened on his Last Outing

Visibly weakened (the actor had accumulated health problems in the last decade: stroke, cancer, stays in CHSLD, dementia) and moving in a wheelchair, the chic actor had nevertheless taken the time to meet residents of Maison Jean Lapointe before attending the ceremony and the speeches offered.

He had even joked on the microphone, surrounded by his wife Mercédès, his family and his many friends.

“I spent some difficult years […], whispered Jean Lapointe to the microphone. From the bottom of my heart, I want to say a big thank you. Thank you for those that this organization has helped, it is perhaps what I am most proud of, even if I am only the instigator. »

The President and Chief Executive Officer of Quebecor, Pierre Karl Péladeau, paid tribute to Jean Lapointe by emphasizing the great friendship between the actor and his father, Pierre Péladeau.

“I know Jean Lapointe in the context of his friendship with my father, he explained to Journal. They both had a lot of fun, we saw it frequently at home. We saw them joking and having fun, but we also saw them invested, because there was not always only happiness at home: there were also sometimes people who came to ask for help to start their treatment.

He also recalled the last time he was able to speak with the great man; during the evening celebrations for the 40th anniversary of Maison Jean Lapointe, last October.

“I could not help but congratulate him and highlight his generosity, he says about what he had slipped into his ear during this special evening. The organism bears his name and his suffering. He got out of it, bounced back and made it a message of hope. »

He was not farting from the brew

The closeness of Jean Lapointe and Quebecers was due, he believes, to humility and simplicity of the actor.

“My father had an expression, he said: he doesn't fart from the brew! Jean Lapointe was a simple guy. He started at the bottom of the ladder like many Quebecers. What we have today comes from somewhere, and somewhere, men like Jean Lapointe are the builders. We are thousands in Quebec to be in mourning today. »