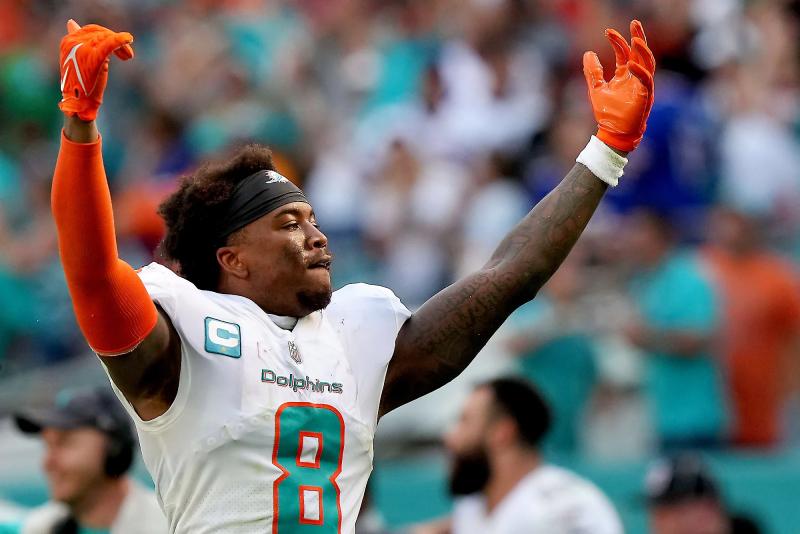 In the blistering heat of Miami, the Dolphins and the Bills engaged in a constant duel which showed that nothing was at stake in the Eastern Division of the American Conference, a division that all the world unanimously gave to Buffalo before the season.

The Dolphins won in a dramatic way, by 21 to 19, at the end of a duel which kept everyone spellbound.

On both sides, the two teams showed a will without thick headed. It's often fitting to swoon over the difficulties of a match in the extreme northern conditions of December, but you had to see players from both teams leaving everything on the pitch under the blazing sun.

The Bills especially struggled with the heat, with their players dropping like flies. Receiver Stefon Diggs, among others, had to leave the field many times to treat cramps.

The Bills, in fact, started the game with two strikes. On defense, they were without five high-quality starters, including their two safeties, who form one of the best duos in the league.

On the offensive line, already that center Mitch Morse was missing, his replacement Greg Van Roten also fell in action. The right side of the line was shuffled more often than a deck of cards at the casino.

In addition to the mentioned six starters who were absent (not counting cornerback Tre'Davious White, who n still haven't played), seven other players during the game missed time or simply left the game. A real slaughter!

The Dolphins still only accumulated 212 yards of attack, but they struck at the opportune moments .

Tua Tagovailoa notably joined Jaylen Waddle on a long gain of 45 yards in a perilous situation on third down and 22 yards to go in the fourth quarter. That bombshell led to the game-winning touchdown.

In fact, Tagovailoa completed all three of his passes that went for at least 20 yards in the air during the game, which seems to be a very encouraging trend in his case.

In opportunistic charges, the Dolphins scored three touchdowns in three appearances in the paying zone, while the Bills missed twice.

Obviously the Bills had to struggle with a tattered secondary, but there are no gifts in the NFL and Tagovailoa hit the mark when he had to.

It's the complete opposite of the Bills, who have had costly misfires. Linebacker Matt Milano dropped an interception that fell from the sky, he who had only green pastures in front of him if he captured this generous offering. Receiver Gabriel Davis also dropped a perfect pass into the end zone. Allen, in turn, completely missed Isaiah McKenzie, dropped in the end zone.

The attack also wandered at the end of the first half with a pass that almost went wrong, rather than wisely settle for the three points by throwing the ball on the ground and then attempting a placement. In the end, it was several games that changed the game.

The Bills outrageously controlled the clock, with 40:40 of possession time. They executed a huge total of 90 plays against 39 for the Dolphins.

In the second half, two offensive sequences ate up 9 min 22 s and 8 min 19s respectively, for an overall total of three vulgar points. Hats off to the Dolphins defense, which folded, but never broke.

In short, the Dolphins, who have an impressive 3-0 record, won the first battle, but the war is still wide open. It promises for the rest of the season between these two old enemies who have had so much trouble before becoming the center of attention again.

The Ravens quarterback continues to go all out on offense, with four touchdown passes and 107 rushing yards, in addition to another rushing major. This “one-man show” won't last forever, but Jackson is on fire.

The Eagles center is not blushing, he who gained more than 300 yards (340) for the second week in a row, in addition to three touchdown passes. The Eagles are a dangerously balanced team.

When the Bears' air offense gains 82 net yards, rusher David Montgomery is injured and the team wins anyway, someone else has to step up. Sophomore rusher Khalil Herbert hit for 157 yards and two touchdowns.

Speaking of rookies, you can't watch the Jaguars without noticing linebacker Devin Lloyd. He flies the field and he finished with three knockdowns, one interception and seven tackles against the Chargers.

The team ended up with an 0-3 record and after the encounter owner Mark Davis met new driver Josh McDaniels behind closed doors. No need to worry about his job, but the climate is already heavy.

The dominant defensive tackle for the Chiefs put his team in trouble when he was penalized for unsportsmanlike conduct after a quarterback sack that appeared to end the Colts' hopes. The penalty is debatable, but a veteran of his caliber must be wise. The Colts continued their winning streak.

Not only did the young Patriots quarterback throw three interceptions, but he ended the game in pain after injuring his ankle on the final play and he had to be carried to the locker room by teammates. To be continued…

Justin Herbert played through a rib injury, but there's nothing to justify a 28-point loss to the Jaguars, even though the Jaguars have clearly improved. The Chargers continue to disappoint.

The Bucs offense has been out of fuel for the start of the season. The offensive line loses the majority of its battles and the chemistry between Tom Brady and his many receivers is not there. The defense takes double bites.

1. No magic for Brady

This time, the eternal magic of Tom Brady did not work at the end of the game against the Packers. The attack was bottled up throughout the match, but Brady had not said his last word by orchestrating a superb push good for a touchdown at the very end of the game. However, the two-point convert was needed to tie the game and the Bucs shot themselves in the foot with a penalty for delaying the game before missing the final pass attempt.

2. The Colts save the day

The Colts probably just salvaged their season with a surprise win over the Chiefs. Trailing 17-13, they got the ball rolling with a 16-game offensive push for 76 yards in 8:14. They converted a fourth down and two third downs, until Matt Ryan joined rookie tight end Jelani Woods for his second touchdown of the game. This first victory will do the most good.

The Vikings did not have it easy against the Lions. They had to make up 14 and 10 point deficits. After their fourth-quarter offense awoke, they resorted to an unexpected hero to bring the debate to a close. The Lions got one last chance to take the lead late in the game, but safety Josh Metellus intercepted Jared Goff's pass to give Mauves the win. Metellus was playing without Harrison Smith and on the previous play he had just dropped an interception.

4. Close to the goal

In a duel between two teams looking for their first victory, the Titans had given themselves a 14-point lead before seeing the Raiders come back quietly in the game. Derek Carr joined Mack Hollins in the end zone to come within two points, but needed the two-point convert to equalise. Carr took aim at Darren Waller, but safety Kevin Byard got in the way, having also had an interception in the end zone earlier in the fourth quarter.

At the end of the first half, Tua Tagovailoa was pushed to the ground by Matt Milano. His head hit the ground hard and when the Dolphins quarterback got up, it was painful to watch. Visibly confused, losing his balance, he left to be assessed under the concussion protocol. Then, magic trick! He resumed his position as if nothing had happened in the second half. Afterwards, informants implied that it was a back injury. Strange, to the point where the Players Association will investigate the situation. To be continued!