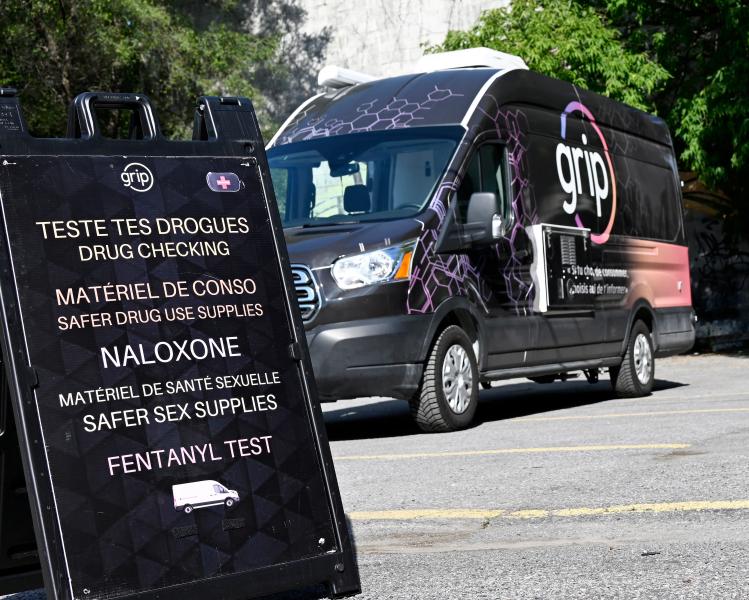 Inside Montreal, journalist Louis-Philippe Messier travels mainly on the run, his office in his backpack, on the lookout for fascinating subjects and people. He speaks to everyone and is interested in all walks of life in this urban chronicle.

Of course, drugs are not permitted on the Osheaga site. Nevertheless, as in any great music festival, it is omnipresent. Instead of burying your head in the sand, a new mobile lab offers drug testing to avoid unpleasant surprises.

Equipped with a spectrometer capable of identifying unwanted substances , it offers festival-goers the opportunity to check the “strength” of their drug.

The objective: to reduce overdoses at the Osheaga festival site this year.

< p>I went to visit the vehicle of the Psychosocial Research and Intervention Group (GRIP Montreal), a Ford Transit, for the moment the only mobile drug analysis laboratory in Canada, I am told.

This is being offered for the first time this year because Health Canada has granted the organization a legal exemption.

“Before that, just holding and handling drugs and then giving them back to people could have been considered criminal,” says Roxanne Hallal, who coordinates the activities of the laboratory truck.

Roxanne Hallal coordinates the activities of the laboratory truck.

It only takes a few minutes to submit the drug to an “identity test”.

“The result gives a kind of fingerprint of the substance and with a search, we can see if it coincides with the pure forms of the substances or if there are contaminants. »

The spectrometer does not alter the samples.

The interior of the van where the festival-goers' drugs are sampled and analyzed.

“The equivalent of the content of a sunflower seed is enough for the machine, then we give this quantity to the user, who therefore loses nothing”, explains Ms. Hallal.

At a festival like Osheaga, the drugs of choice are those that stimulate, like cocaine and ecstasy.

Most overdoses occur when the consumer does not buy what he believes. “Sometimes he thinks it's MDMA (ecstasy), but it's MDA, a much stronger cousin…and then he's taken aback.

As the Alaclair Ensemble song says, “You thought that was what it was, but that's not what it was…”

Many festival-goers, for fear of having their drugs seized, consume them all of a sudden just before entering the site… and it's once there, during the shows, that it can go wrong go.

As in previous years, the GRIP has about twenty workers on site to deal with cases that degenerate. Three or four people take care of the analysis service not far from the door.

“So that our users are not seen by site security who will then search the bags, we will be between the Jean-Drapeau metro station and one of the festival entrances,” explains Magali Boudon, director of GRIP Montreal.

Because not far from there, diggers make sure to catch all the illegal substances they can at the entrance to the festival.

So, while an independent body verifies the quality of the drug, Osheaga employees are doing their best to prohibit it…