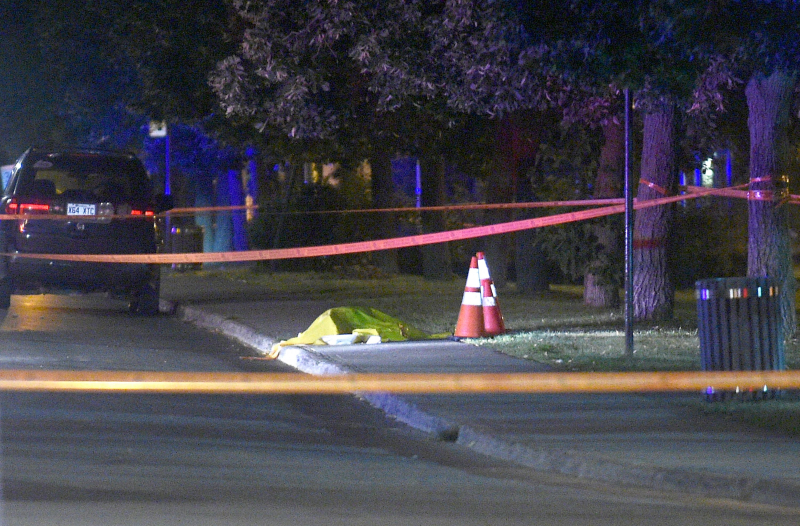 The Laval resident suspected of having committed three murders in greater Montreal since Tuesday evening was surrounded by police forces since the middle of the night from Wednesday to yesterday, around the Motel Pierre, where he was shot in the following hours. The Diaryretraces the thread of events that led to the intense hunt for the alleged serial killer, Abdulla Shaikh, 26.

21 h 45: The suspect allegedly committed his first murder by shooting down André Fernand Lemieux, father of boxer David Lemieux. The 64-year-old man was in a bus shelter on boulevard Jules-Poitras, in the borough of Saint-Laurent in Montreal.

22 h 50:A little over an hour later, he would have reoffended, fatally hitting Mohamed Salah Belhaj, 48 years. The events took place this time in Saint–Benoît Park, in the Ahuntsic district of Montreal, about 3 km from the first victim.

Unknown time: The Montreal police are on their toes and on the heels of the suspect. They are then looking for a white Dodge Challenger. At some point, they manage to tail a car that matches this description. According to our information, however, it was the wrong vehicle at the time.

21 h 30: Still thirsty for blood, the suspect is said to be again acted out, in Laval. A 22 year-old young man, Alex Lévis-Crevier, falls under the gunman's bullets, on 1re Rue.

Time unknown: The police realize shortly after this third murder that they are not following the right white Dodge Challenger vehicle, they redouble their efforts to catch the real suspect.

Shortly before 0 h 30: The suspect arrives at the Motel Pierre, on Marcel-Laurin Boulevard in the Saint-Laurent borough. It enters the parking lot from rue Grenet. He is seen driving erratically and failing to stop. He is driving the famous white Dodge Challenger. He parks near the Tim Hortons.

He gets out of his car, begins to look around. After 2 minutes, he returns to his car to smoke a cigarette.

The individual is alone and lowers his head. Then he heads for the motel, he has nothing visible in his hands. He is described as a swarthy suspect with long hair and wearing a black sweater.

Between 0 h 40 and 0 h 45: While trying to get a report for a stolen vehicle, an officer from the Service de police de la Ville de Montréal (SPVM) accidentally noticed the presence of a white Dodge Challenger in the parking lot.

The police call for reinforcements, so that they can carry out checks.

During the night: About thirty police officers take position around the hotel all night while waiting to properly plan the intervention with the tactical intervention group (GTI) of the Montreal police. The suspect is then surrounded. A perimeter has been erected in the quadrilateral of boulevards Marcel-Laurin and Henri-Bourassa as well as rue Grenet and rue Poirier.

Very close to the hotel, there is a Service Canada office for passports, where about fifteen people lined up in the middle of the night under a marquee. They had to be evacuated.

5 h 30: The GTI arrives at Motel Pierre and the police begin their preparations.

7&nbsp ;h: The GTI police officers break down the door of the place where the suspect is holed up. They are then confronted by Abdulla Shaikh, in possession of a firearm.

The 26-year-old man allegedly fired twice at the officers, according to our information. He was then shot by at least two bullets in the head and his death was declared at the scene.

The police then believe that they have neutralized the individual who would be the author of the three homicides that occurred in Montreal and in Laval.

12:10 a.m.: Police officers from the Sûreté du Québec arrived at the Shaikh family's home in Laval to tell them the news. The latter refuse to believe that he is the author of the murders.