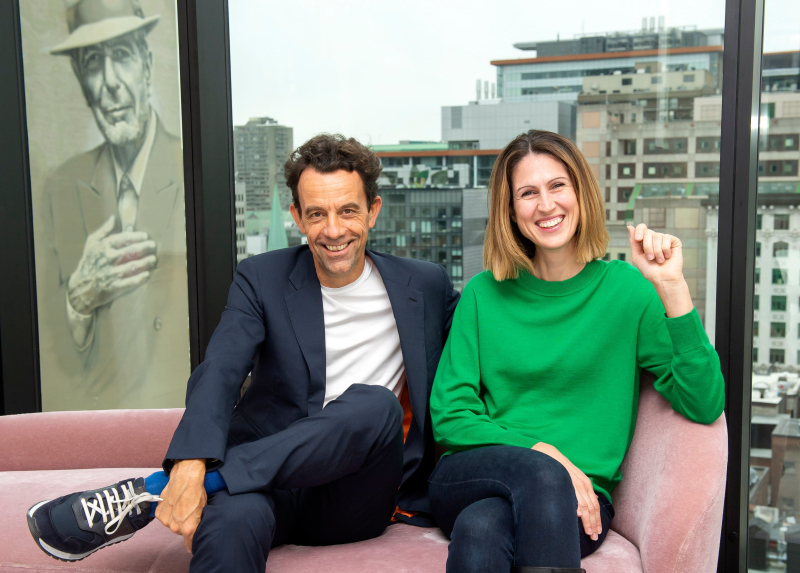 The landscape of humor in Quebec will change significantly next spring with the arrival of the producers behind the Montreux Comedy festival, learned Le Journal . They will organize a new multi-genre event in Montreal in May, EXCLAM, and intend to invest “several million” in the city over the next few years.

“Today, there is an opportunity to create a global comedy giant with a strong French-speaking base. Passing through Montreal to talk about their new EXCLAM event, Grégoire Furrer and Chloée Coqterre Bernier are not lacking in ambition as to their ambitions for Montreal in the coming years.

In Europe, Furrer is a big comedian, having founded the Montreux Laughter Festival in Switzerland in 1989, which has now become the Montreux Comedy Festival. With his box GF Productions, which will become Jokenation in 2023, he also takes care of comedy festivals in Lille, Cannes and Johannesburg.

The producer has had Montreal in his sights for several years. “I fell in love with Quebec 30 years ago,” he says. I've always wanted to do something here, because it's an essential place in the world of French humor. »

After having long suggested that he wait before wanting to break into the Quebec market, the artistic director of Montreux Comedy, Quebecer Chloée Coqterre Bernier, recently told him that the time had come. “Quebec has a fairly unique maturity in terms of the humor industry,” she says. This maturity allows the type of event that we want to come and do here. »

This event is EXCLAM. It was idealized by Chloée Coqterre Bernier during the two years she and Grégoire Furrer spent in Montreal during the pandemic. It will be held from May 17 to 20, 2023 at Espace Saint-Denis. The artistic director talks about EXCLAM as an event where humor will unite with several other forms of art as well as new technologies.

“We are in a world in which humor has stagnated a little for a few years, she observes. Because we always offer the same cases to artists. They go on stage for an extremely effective five minutes and have to have a laugh every 40 seconds. Today, humor could develop differently. »

With EXCLAM, the organizers will want to offer experiences that will allow artists to create differently. There will be shows in the classic form that we know, but we could also add virtual reality, for example, says the artistic director.

The programming will be fine-tuned over the next few weeks and the organization hopes to be able to announce the first names of artists around February. “We are opening up to the Francophonie,” says Chloée Coqterre Bernier. There will be French, Haitians. But Quebec artists will be ultra-important. We do it here with them first. And we'll see how it develops. »

Quebecer Martin Durocher, from Bite Size Entertainment, suggested the name EXCLAM. “EXCLAM comes from exclamation,” says Chloé Coqterre Bernier. The first definition of an exclamation is a cry of joy. The EXCLAM event will have exactly this same energy, this same dynamism. »

The objective with this event is that the artists then leave with their creation and travel elsewhere in the world, to the festivals of the Jokenation group. “We can immediately open up this international network to this industry,” says Grégoire Furrer. We know that today, Quebec industry is very eager to travel and create bridges and footbridges with foreign countries and finally embrace this Francophonie. We are talking about 300 million people who speak French in the world versus eight million people in Quebec. »

Grégoire Furrer in no way wants to describe EXCLAM as a “festival”. “It's an event,” he said. We didn't want to be in the great period of festivals in Montreal because there are already a lot of things. And having lived it for two years in Montreal, I saw how the third weekend of May, which corresponds to the opening of the terraces, was a really awaited moment. I figured that's where to go. People will come out. »

The EXCLAM event will be the starting point for an establishment in North America for the Jokenation group. “We plan to open offices in Montreal and invest several million there over the next three or four years,” says Grégoire Furrer. We want to hire about 50 permanent employees and 100 to 150 indirect employees. »

“We want to use this fabulous playground that is Quebec,” he continues. There is a know-how that is unique in gaming, in digital. We will set up our media center there and then deploy throughout North America and even South America. »

Quebec partners, financial and operational, will be approached to successfully complete the operation. “We intend to have a group that is from Quebec,” says Grégoire Furrer. We remain a French-speaking European group with a global vision. But in Quebec, it will be a Quebec group.

With such expansion plans on this side of the Atlantic, can Jokenation be seen as a serious competitor to Just for Laughs? “No, absolutely not, replies Grégoire Furrer. Besides, we know them very well. We have collaborated with them in the past and we will be delighted to collaborate with them in the future. We are convinced that there is room for several actors and that it is ultimately through exchange and healthy and respectful competition that we can build things. »