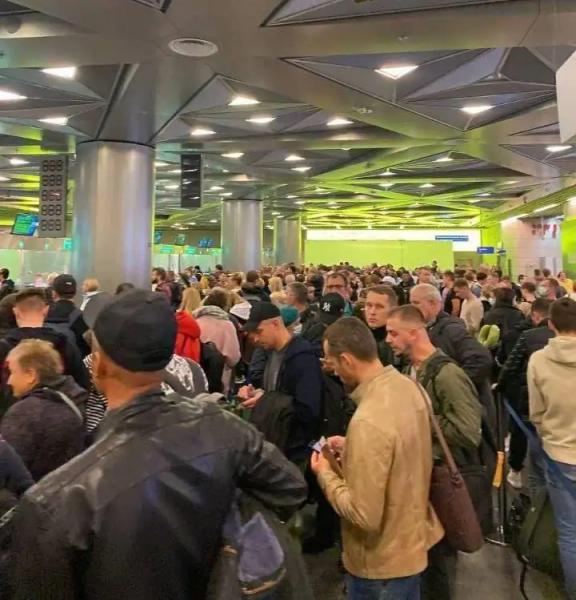 Internet search for “How to break your arm” on the rise.

Difficult to stop the bleeding and close the borders

For the researcher in residence at the Raoul-Dandurand Chair in Strategic and Diplomatic Studies David Dubé, if many people can still flee, it is above all because the issue of strong management of Russian borders is quite difficult.

The researcher in residence at the Raoul-Dandurand Chair in strategic and diplomatic studies David Dubé.

“Russia is quite big, it's quite difficult to control at the base”, explains the researcher.

Nevertheless, he adds that despite flights by planes and legal means to leave , Putin is probably focused on the war and the fact that it's going very badly.

“Hard to say why he doesn't minimally try to shut them down. Perhaps he minimized the risk of seeing a vague aftermath of emigration…” he explains.

The Georgia-Russia border at Verkhny Lars is often tailed-back, but the social media footage of it today is insane. Spot the guys crossing on scooters, avoiding the ban on pedestrians. https://t.co/6NKoqqE4Gt pic.twitter.com/e3RS82B905

The researcher in residence at the Raoul-Dandurand Chair Julien Toureille adds that this leak poses many dilemmas, but also many opportunities, for the international community.

The researcher in residence at the Raoul-Dandurand Chair in Strategic and Diplomatic Studies, Julien Toureille

“While the position of neighboring countries seems to evoke a certain unease, there is still within the Western bloc a strong evocation of a humanitarian duty to welcome these populations.”

He adds that these “fukers” can serve as tools of anti-Putin propaganda.

“They demonstrate that there is not a total support of the Russian population for the war. We can then counter Putin's rhetoric that Russia faces an existential war against itself and its people.”

A long tail on the Russian-Mongolian border. Russians flee from mobilization in all possible directions. #RussianArmy #UkraineWillWin

Mr. Dubé nevertheless insists on the limited usefulness of such a speech.

“We can no longer necessarily assume that Putin thinks in rational terms. He has a die-hard behavior completely disconnected from reality,” he explains.

Consider the “runaways” as refugees and welcome them?

For the full professor and director of the master's program in applied international law and international politics (DIPIA) at the Faculty of Law of the University of Sherbrooke Geneviève Dufour, the answer is yes.

Full Professor and Director of the Master's Program in Applied International Law and International Politics (DIPIA) at the Faculty of Law of the University of Sherbrooke, Geneviève Dufour,

“If these people are fleeing out of fear for their lives, they can certainly apply for recognition of refugee status. However, the granting of the status will be done on a case-by-case basis,” she explains.

Mrs. Dufour specifies that “deserters do not automatically benefit from this status but that in all cases, with this what we have seen on the repression of those who oppose the mobilization for political reasons, we can certainly say that those who oppose the war are exposing themselves to a risk for their lives,” he explains. -she.

Should Canada then welcome so many? Here too, Ms. Dufour replied in the affirmative.

“Canada supported the G7 declaration Refuge for dissidents fleeing Russian political repression. In the latter, it is mentioned that “We are concerned that Russia's brutal war of aggression against Ukraine is being accompanied by ever-increasing internal repression in Russia […]. We will offer protection to Russians who are persecuted by the Russian regime in accordance with our national laws and requirements.”

For 72 hours, Russians who can continue to flock to airports and borders to flee a country sinking into the escalation of a conflict that it itself started.

Beyond the question of the “fukers”, those mobilized seem to be mostly affiliated with ethnic minorities, citing regional disparities and above all an attempt to contain anger in the Russian ethnic majority.

A example of forcibly mobilized students from a university in the predominantly Mongolian region of Buratia has been widely shared on social media.

For David Dubé, above all, we must see here a logical approach by Russian power.

“It is not completely stupid to perhaps go and mobilize in certain regions where information is less well received. We want to mobilize groups that are less associated with Ukraine in terms of ethnocultural similarities,” comments the researcher. some specialists believe that the power of Moscow is taking advantage of this opportunity to also include internal ethnic cleansing.

The International Criminal Court in The Hague

< p>Julien Toureille recalls that such actions may also be the subject of investigations which may be added to those in progress against Russian abuses committed since the beginning of the conflict.