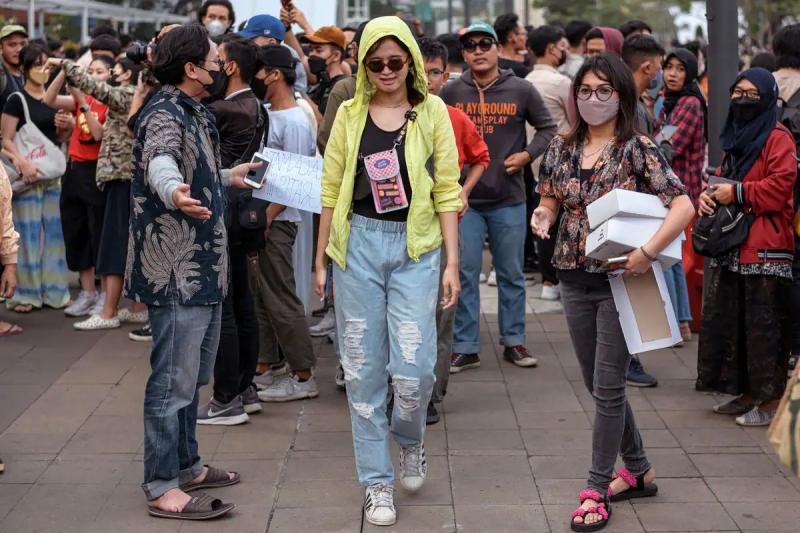 Impromptu fashion shows at one of Jakarta's busiest traffic intersections aren't to everyone's taste. But no one can resist the free expression of young fashionistas in the Indonesian capital.

In recent weeks, young people from the city's suburbs have flocked to the business district to participate in the “Citayam Fashion Week”, a current fashion festival, broadcast on TikTok and Instagram.

“I feel like it's the place where I can express my style and create content. It's really fun because there are so many people and I can make new friends here. I don't even want to go home,” exults Ricat Al Fendri, an 18-year-old high school student met by AFP.

Every morning, the young boy hops on the train with his friends towards the fashionable place, wedged between high towers and trendy cafes to show off his outfits of the day.

Police try to ban the use of the pedestrian crossing as a podium and, over loudspeakers, asks the crowd to move away.

In vain. Girls in baggy jeans and colorful sunglasses, and boys in leather jackets or faux fur coats and stylish sneakers continue to film their exploits to post on social media.

Some teenagers even was caught sleeping in the neighborhood after missing the last train home.

“We are allowed to hang out here. It's a public space and for me it's a great way to relieve the stress of school exams,” says Ricat.

The phenomenon of wild parades first spread by word of mouth and through smartphones in this megalopolis of 30 million inhabitants.

Saera Wulan Sari, 15, earns a living selling clams in North Jakarta after dropping out of school. She came as a spectator to chat with friends.

“I'm always impressed by other people's outfits, they're so much cooler than me and their clothes are really stylish,” she sighs .

The movement has become so popular that it has replicas elsewhere in Java, Indonesia's most populous island, in cities like Semarang and Bandung.

The rally, whose name refers to the Citayam district in the suburbs of Jakarta where many of these young people come from, is compared to a more modest version of the Harajuku district emblematic of Japanese fashion.

Its virality caught the attention of celebrities, influencers and public officials, including President Joko Widodo, who believed that young people should be able to express their creativity.

Local brands are beginning to grasp the opportunity and surf on the phenomenon by promoting their products through the “stars” of the movement, offering them free clothing, shoes and advertising.

“Adolescents are looking for an identity and they need recognition and validation. These teenagers saw that a quick way to get them was through “likes” and shares,” Devie Rahmawati, a social issues expert at the University of Indonesia, told AFP.

“Marginalised teenagers used to resort to the violence of illegal racing, now they choose fashion instead. It's a positive thing and I think it's beautiful.”

For many young people, the booming street fashion is also a means of affordable expression, with the city's wealthiest neighborhood as a backdrop.

“To participate in Citayam Fashion Week, you do not have to wear certain outfits or certain brands that empty your wallet”, he underlines.