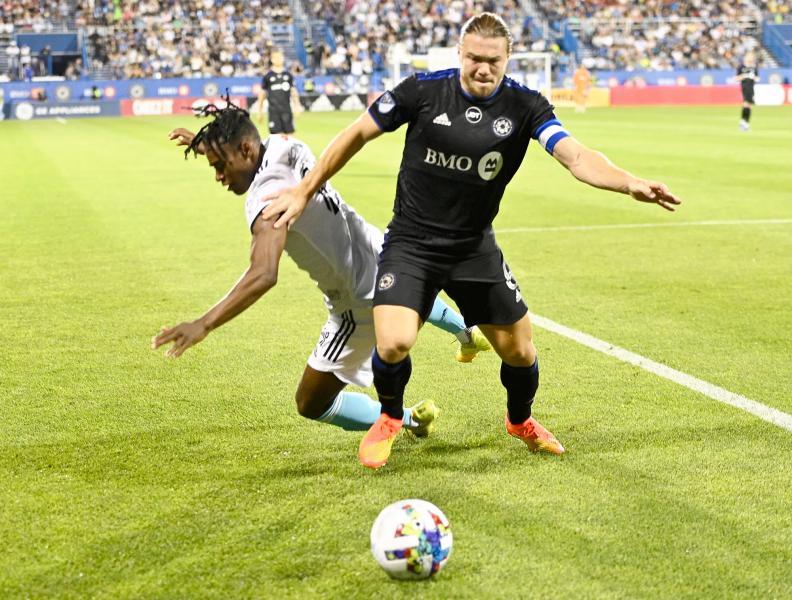 It was a great evening on Saturday. Stade Saputo was filled with very enthusiastic fans, who were not only able to witness the tribute to Patrice Bernier, but also a convincing victory of 4 0 to 0 by CF Montreal over the New England Revolution.

And yet, there was no indication of such an outcome, at least not in the first 25 minutes of play when both teams gave the impression that the final result would be very close.

The tactics of both teams were very obvious from the start. Defensively, Wilfried Nancy's troop pressed everywhere on the field while the Revolution had no problem letting their rival advance.

On offense, on the CF Montreal side, the animation started in midfield with Samuel Piette and then moved to the flanks. This allowed the Montreal team to obtain overstaffing and leave the middle a little more open so that the attackers could work in this space. The Revolution's offensive tactic was through its playmaker, Carles Gil.

Once the first half of the first half passed, CF Montreal really took control of the game. And it all started with Kei Kamara's goal in the 26th minute. Thereafter, the Montrealers were in control in all phases of the game and were able to obtain, all in all, a fairly easy victory.

One thing that was obvious to note was the collective play and the commitment, both in attack and defense, from CF Montreal.

CF Montreal dominated their opponent by scoring goals in several different ways. First of all, the first was one of position and progression. The players made several passes and combinations that led to Kamara's net. The latter also took advantage of Romell Quioto's fine comeback and used his experience, his skills and his stature to find the back of the net.

CF Montreal's second goal was the result of a classic counterattack. Mathieu Choinière won his one-on-one duel well and allowed rapid progress forward, with good runs and acceleration. The Revolution looked completely unbalanced on the footage. Lassi Lappalainen accepted Choinière's handover to then give the ball to Quioto who was following the game well and who was unmarked.

Subsequently, for the third achievement, it was due to a more direct game. Piette sent a diagonal ball over the Revolution defense. The Quebecer thus found Quioto, who brought himself into a one-on-one duel, which always favors the attacker, particularly in the penalty area. The Honduran finished the job well by dominating the defender who was in front of him. Quioto was also selected as one of the eleven par excellence of the last week in the MLS.

In the end, this performance confirms more and more that CF Montreal can be able to play well in regular season, but also during the playoffs.

However, and even if it was to the advantage of CF Montreal , there is one thing that I did not appreciate: it was the referee's big mistake on the penalty shot converted by Matko Miljevic. I think there was no reason for a penalty and the referee could have repaired his mistake with the video replay, but preferred to keep his decision.

Also, Miljevic's celebration was unnecessary, with such a lead so late in the game. It may be a lack of maturity from the 21-year-old.