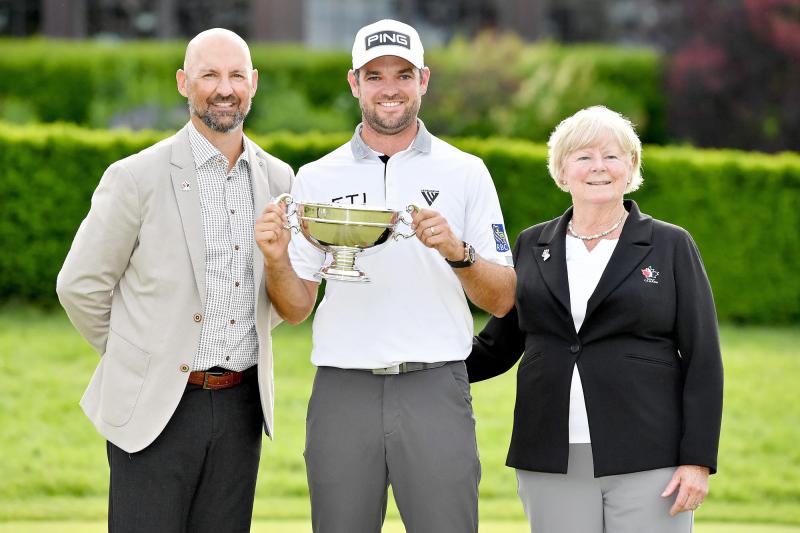 OTTAWA | Laurence Applebaum won't give up. In his “vision 2032”, the big boss of Golf Canada wants to see 30 of his professionals establish themselves on the two biggest golf tours in the world, the PGA and the LPGA, in the next 10 years. And Quebecers will have to advance on these great stages one day.

When he consulted the set at the Canadian Women's Open at the beginning of last week and saw 19 golfers from the maple leaf, including 12-year-old Lucy Lin, and several young stars, he couldn't help but smile and look optimistically into the future.

Five of them took part in the weekend rounds. While Brooke Henderson was expected to hit the bullseye in her native region, it was young Maddie Szeryk and veteran Alena Sharp who stood out at the Ottawa Hunt Golf Club.

Applebaum took note of the presence of the four Quebecers led by Maude-Aimée Leblanc, who regained her smile.

But the CEO would like to see more of the Belle Province, both in men and women. “I emphasize this element. I want to see Quebec golfers go through the stages and get to the two biggest circuits. There are some great talents playing on the minor circuits. They have to get through. »

Applebaum was thus referring in the men's category to Joey Savoie, who gravitates on the PGA Tour Canada satellite circuit, to Étienne Papineau, who had the opportunity to participate in the Phoenix Open on the PGA last winter, and to a handful of hopefuls playing in the American collegiate ranks.

Savoie ranks 25th overall for the Canadian season with a top 10 on the clock. Papineau, meanwhile, is at 36th level.

Among the women, he noted the enthusiasm around Leblanc in Ottawa and he sees Sarah-Ève Rhéaume and Brigitte Thibault establish themselves in the big circuit. At least he hopes so.

“For guys, the step is high, he recalled, dismissing the case of Ontario Taylor Pendrith, who climbed on the PGA by burning the minor circuits. We feel that a Quebecer will break through, but it is a matter of time and consistency. »

At the Canadian Open at the St-Georges Golf Club last June, 20 golfers represented the country . None of them came from Quebec. During the previous edition in 2019, there were three.

No Quebecer has ever managed to establish themselves on the PGA Tour.

Applebaum therefore hopes that trend will change over the next decade.

“We have so many good things happening right now, at all levels of the game, “he said. he indicated looking towards the various results of the national team. Recent performances are definitely encouraging. »

At all levels, 15 golfers from the province wear the colors of the national team with 58 members.

Ready for any eventuality

The least we can say is that things are moving quickly this summer in the landscape of professional golf with the arrival of the controversial league LIV Golf.

It will soon announce the identity of the four additional tournaments that will appear on the list of the 12 major events bringing together the best golfers from the 2023 season. Each of its tournaments will offer a purse of $20 million.

Through the branches, we hear that this announcement could take place at the Presidents Cup, in Quail Hollow, in three weeks.

You might think that the Canadian Open, the third oldest tournament in the world, could be identified in this list.

Presented by a major sponsor of the circuit, the Royal Bank of Canada, and finalist for the title of tournament of the year in 2019, the National Open could also win this prize in 2022.

Golf Canada is prepared for any eventuality.

“We are constantly working with the circuit to put our tournament in the best positions,” insisted CEO Laurence Applebaum. We want to measure ourselves against other national championships. We want to be among the world leaders to attract players, to allow them to deliver spectacular performances at an important event. »

In addition, invited to comment on the big changes of the summer in the world of golf and the astronomical distribution money from the Saudis, Applebaum said he was not worried about Canada's elite golfers. approached us to discuss an offer. All we can do is offer them our support. They make their own decisions. We are a partner of the PGA Tour. »

The time will certainly come when Golf Canada will have to take a stand, as many of its golfers are achieving success and the organization is involved with both the PGA Tour and the LPGA. .

The commissioner of the LPGA had also said she was open to discussing with the Saudis if they approached her circuit.